Half a century of the Arabian Drilling Company 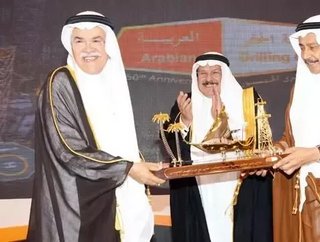 Under the auspices of His Excellency Eng. Ali Ibrahim Al Naimi, Saudi Arabia's Minister of Petroleum and Mineral Resources, the Arabian Drilling Company celebrated its 50th anniversary in the city of Al-Khobar. His Excellency Naimi is accompanied by His Excellency Abdul Rahman Abdul Karim, Engineer Khalid Al Falih, CEO of Saudi Arabian Oil Company (Aramco), Mr Abdullah ibn Nasir Al Hilal, CEO of Aramco Gulf Operations Company and a number of Saudi Aramco VPs and senior officers, in addition to a number of businessmen from the Eastern Province. His Excellency the Minister and the distinguished quests were received by Mr. Mohammad Yousif Rafie, chairman of the board of directors of Arabian Drilling Company, and the company's two managing directors Mr Saad ibn Abdullah Al Saab and Mr. Mohammad Umar Loan.

The celebration included a documentary film which embodies the stages of company operations development. At the end of the celebration party, commemorative gifts were exchanged by senior guests.

The company owns a number of rigs that work efficiently in various climatic and environmental conditions. This has enabled the company to effectively handle different work challenges. The company owns 16 land drilling rigs that vary between heavy duty rigs (1,500 hp) and extra heavy duty (2,000 to 3,000 hp). The company owns seven marine rigs (large and extra-large), all of them are equipped with high standard specifications that enable them to operate off-shore up to 400 feet deep (almost 120 metres). Additional equipment includes two multi-purpose self-driven marine platforms for oilfields services and testing. Recently, the Arabian Drilling Company was able to build two large offshore rigs which were manufactured according to the specifications and requirements of the companyÃ¢â‚¬â„¢s clients in Saudi Arabia. The company says it is actively seeking to expand rig fleet at a rate of four rigs annually, according to companyÃ¢â‚¬â„¢s prediction of market data and requirements.