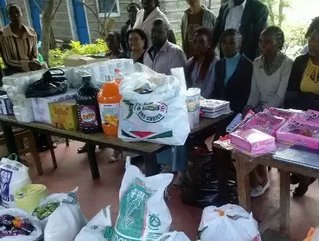 Barton explained that this is a long term project that extends beyond just funding and support for the home.

“Our focus is on helping and empowering the young people in Kenya, and another element of our work with Saidia Furaha is an empowerment initiative through which we are offering training and work experience to high school graduates from the home.”

Saidia Furaha is a non-governmental organisation that runs the small, but welcoming, children’s home situated in Kitengela,just on the outskirts of the Kenyan capital, as well as a number of community outreach programmes.

Barton said: “The home currently has 16 resident children aged between five and 17, and also provides for the needs of 67 children under eight who come in daily from the neighboring village for elementary studies.

“It provides a safe haven for orphans, abandoned and abused children. It also accommodates teenage girls rescued from early marriages and female genital mutilation, which though not as common, is still very much in existence in some of the larger Kenyan communities.”

In addition to caring for children in need, Saidia Furaha children’s home also operates community programmes, including monthly seminars on HIV and AIDS targeting the youth and young adults in the local community, he explained.

The home also has a borehole and sells water, on a small scale, to the neighboring community.

Saidia Furaha’s training center provides training in vocational skills like dressmaking and needlework, as well as apprenticeships in metal work and welding.

The home’s nursery school was expanded recently, Barton said, so that neighboring parents can drop off their children for elementary schooling and play, at subsidised costs, for those who are able to afford it.

In addition to Imperial Health Sciences’ commitment to long-term assistance for the home, the company’s employees have also got involved, and a group of staff members recently visited Saidia Furaha with donations of groceries, clothes and gifts.

“It was a humbling and uplifting experience, and we are delighted to have this opportunity to work with the home to help those in need,” Barton concluded.

Imperial Health Sciences is a member company of Imperial Logistics.