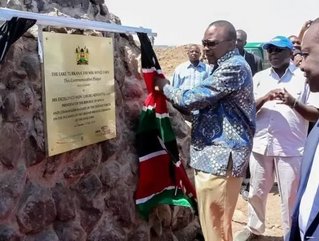 President Uhuru Kenyatta broke ground and toured the facilities at Africa's biggest wind-power project in Laisamis, Marsabit County, as part of an initiative that will see Kenya become a world leader in renewable energy generation.

The Lake Turkana Wind Project is the largest single private sector initiative on the continent and has cost €623 million to develop and will produce 310MW of electricity when it becomes fully operational in 2017. It is expected to contribute its first 90MW of electricity to the national grid by next year.

As he toured the accommodation, President Kenyatta called for more people to invest in wind power production, promising increased Government co-operation to improve the investment environment.

The region does not support any developed economic activity save for animal husbandry due to unsupportive weather conditions; the wind project is set to change this, employing people both directly and indirectly.

One way this has already happened is through its partnership with Southern Engineering Company (SECO) which was responsible for constructing surrounding accommodation units.

SECO CEO Omri Cohen said: “This is a great case study for future projects, the Kenyan Government has been so supportive. Kenya is one of the leading countries for green energy. We are one of two Kenyan companies taking part in this project.”

He added: “We hosted the president and his ministers in the SECO village that we built; he laid the first stone in a house we were building, operated one of our machines and spoke with our employees about the project.”

Power from the plant will cost 8.42 US cents per KW and is projected to benefit Kenyans by driving down energy costs, as well as generating energy in a clean and sustainable way, for future generations to come.