Power to the people: Bosch in Africa 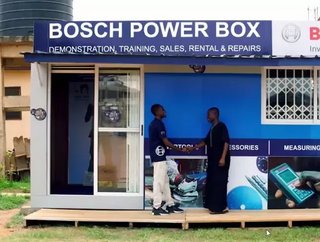 In June 2016, German technology firm Bosch launched what it called a “mini industrial revolution” in Ghana’s Kumasi region by introducing the Bosch Power Box initiative. The idea was this: artisans and tradesmen from across the country would receive access to the very latest Bosch technology, training and micro-financing. A year later, African Business Review catches up with Bosch to review the Box’s first year of existence. We talk to Vice President of Bosch Power Box Tools, Vonjy Rajakoba.

How did you begin working for Bosch and the Power Box project?

I am originally from Madagascar and emigrated to Europe to study. I have played several roles in sales and marketing within German and Asian companies before I joined the Bosch group in 2009. I started at Bosch Sensortec, which at that time was a start- up developing and marketing sensors for consumer electronics. I was leading the global sales organization and was mainly active in Asia, Europe and the US. I returned to the Continent in 2014 when I took up the role of Head of Sales of Bosch Power Tools Africa.

Tell us about the Bosch Power Box.

In a nutshell, the Bosch Power Box is a container that we placed on permanent basis at the very locations where artisans and craftsmen are gathered. In the Bosch Power Box, we conduct trainings and demonstrations, rent and sell tools, enable with micro-financing and offer service as well as repair.

Bosch Power Box is a revolutionary initiative designed to create, up-skill and grow small businesses and bring them into the formal, mainstream economy. It is made with the intention for all artisans who work on producing items such as furniture, doors, partitions and the like, to transform their work efficiency.

It is a long-term project designed to foster entrepreneurship and ensure a smooth transition for small businesses from the informal to formal sectors. Each Power Box has managers, technical staff and trainers, all of whom have received dedicated training from Bosch.

Sounds like a useful initiative, but how exactly does the Power Box improve accessibility to Bosch’s tools?

Through the Bosch Power Box, we will provide demonstrations and training to further enhance production/service efficiency/output for all artisans. The Box will provide various tools, some of which are cordless. Cordless Bosch power tools come with rechargeable batteries thus creating convenience and ease of use on the go. Just like the concept of the mobile phone, users will be able to recharge their power tools’ batteries and use them at multiple locations for several hours without having to bother about an additional power source.

What research and development (R&D) was done prior to the Bosch Power tools launch?

As a market leader in power tools, we have to strive for more than just increasing our market share. We need to reach out to new users, the majority of whom do not use power tools, but rather hand tools. These target users are typically craftsmen in the informal sector and they are often gathered in one location.

In our interactions with these African artisans we have identified a knowledge gap, an affordability challenge and strong serviceability expectations. These observations have led us to propose the Bosch Power Box.

After proposing the Box, how was it received by Ghanaians?

Artisans in Ghana welcomed the holistic approach that Bosch had adopted: we were not there just to try and sell power tools to them but to enable or empower them with education, affordability and service. We are already opening additional Power Boxes at other locations in Ghana.

If Bosch’s expansion across Ghana goes well, will you be planning to introduce the Power Box to other African countries?

Thanks to the receptiveness that we have seen in Ghana, we have already deployed the Bosch Power Box in Nigeria and Kenya. We are considering to scale up the concept in West and East Africa using a franchise model. We are engaging with young entrepreneurs ready to act as franchisees.

Let’s talk funding. How much has the Bosch Group invested into the Power Box?

Bosch has invested in the concept and mostly in training those who teach on the Power Box, the Power Box manager and the persons conducting after-sales service and repair. We will keep on investing in order to ensure that the Power Box meets the demanding standards that we have set to better serve our users.

As we are now in the process of scaling up the initiative, the business model that we are promoting is a franchise model in which the Power Box manager makes an initial investment and benefits from the expertise, the products and the strength of the Bosch brand.

Where do you see this initiative in five years’ time?

We would like to see a Power Box in each of these locations in Africa where there is a concentration of artisans, and that it is truly an agent of change for the better. A change from hand tools to power tools, change for an increased efficiency, change from the informal to the formal sector. Our vision is to improve skills and change livelihoods in a very tangible way.