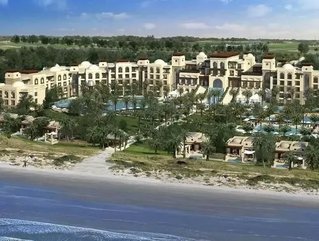 This includes the opening of five new properties in the UAE, four in Saudi Arabia, two each in Turkey and Iraq, and the opening of Rotana’s first ever property in Muscat, Oman.

The extension work on one of the company’s iconic UAE properties, The Cove Rotana Resort in Ras Al Khaimah, will also take place in 2017.

Omer Kaddouri, President & CEO of Rotana, commented: "Rotana has an ambitious global expansion strategy and the vast number of property openings due to take place in 2016 and 2017 will not only increase our presence in a range of destinations but also allow us to reinforce our position as one of the leaders in the hospitality market in the Middle East, Africa, South Asia and Eastern Europe.

“We are dedicated to developing new opportunities and we are particularly excited about the opening of the iconic Saadiyat Rotana Resort in Abu Dhabi. Saadiyat Island is an exceptional destination, set to become an internationally renowned arts hub, and we believe our brand is ideally positioned to cater to the needs of global travellers seeking luxury facilities and world-class service.”

Identifying Africa as a key growth market, Rotana is set to make its debut in the continent with the opening of Kin Plaza Arjaan in Kinshasa, capital of the Democratic Republic of Congo, late in 2016. In addition to the property in Congo, the group currently has a number of projects under various stages of development across Africa including Marrakesh, Luanda, Nouakchott, Dar es Salaam and Lagos, illustrating the emphasis it is placing on building a continent-wide presence.

Rotana’s 16 new developments and one extension that are set to open in 2017 are as follows:

Characterised by modern architecture and state-of-the-art facilities, Erbil Arjaan will cater to both long-term guests and business travellers. The property will feature 168 fully-furnished hotel apartments, two outstanding restaurants and five fully-equipped meeting rooms. Moments away from the airport and in close proximity to the local shopping malls, Erbil Arjaan is ideally located.

With its central location, guests staying at Centro Olaya will be a few minutes away from the ever-expanding business area of the city. The hotel will feature 156 spacious rooms, three dining outlets and three meeting rooms. A contemporary and stylish property, Centro Olaya will offer affordable accommodation and hospitality which the Centro brand is best known for.

Offering an impressive location, this Centro hotel sits on the Al Khobar Corniche and boasts unobstructed views of the sea. Featuring 253 rooms and suites, Centro Corniche’s amenities are specifically geared to the needs of the travelling executive including well-appointed meeting rooms, three dining outlets, gymnasium and swimming pool.

Capital Centre Rotana, located within the Capital Centre development, is the perfect base for business travellers, with its unparalleled location close to the National Exhibition Centre and only 20 minutes from Abu Dhabi International Airport. The property will feature extensive luxury facilities including 315 studio rooms and suites, four dining outlets, swimming pool, and recreation and fitness facilities.

The first property under the Rotana brand to launch in Muscat, Sundus Rotana will boast outstanding views of the Sea of Oman and the Al Hajar Mountains. Designed to cater to business travellers, the hotel sits adjacent to Muscat’s International Exhibition Centre and features 215 rooms, a ballroom, six meeting rooms, an executive lounge and a fully-equipped business centre.

Alongside Centro Shaheen, this is Rotana’s second property under the Centro brand to open in the heart of Jeddah. Centro Salama is located just minutes from premium shopping centres, national embassies and business districts. The hotel features 189 rooms and suites, Bodylines Fitness & Wellness Club, swimming pool and extensive meeting facilities.

The Cove Rotana Resort is currently undergoing a significant expansion, adding to its five-star offering. Due to be completed in Q2 2017, 112 well-appointed standard and superior rooms will be added, along with 10 upscale junior suites and 21 executive suites. The expansion will also include the addition of an all-day dining restaurant, an outdoor pool with pool bar and three slides, and a kids club and pool.

Located on the world-class Saadiyat Island, this five-star resort will boast a modern and elegant design, and is just a few minutes’ drive from Abu Dhabi International Airport. Ideal for both business and leisure travellers, Saadiyat Rotana will feature 327 upscale rooms and suites, 13 beach villas, a private stretch of beach and large conference facilities. Guests will have a choice of eight dining outlets serving a wide range of cuisine and access to the Bodylines Fitness & Wellness Centre.

Situated adjacent to Creek Rotana hotel, Creek Arjaan is just a short drive from Dubai Airport and in close proximity to the shopping districts of the city. Featuring 90 modern and cosy rooms, conference facilities, fitness centre and a choice of four dining outlets, Creek Arjaan is set to become a sought-after property for both business and leisure travellers.

The first Rotana property to open in Iran, as part of the Rayhaan brand, this five-star hotel is located in Mashhad. Guests will be conveniently located next to the city’s main cultural attractions including the shrine of Imam Reza. The hotel will feature 272 rooms and suites, and a modern design that complements the values of Islamic culture.

Situated on the European side of Istanbul, in the Günesli neighbourhood, this 152-room hotel offers a prime location, within close proximity of Istanbul International Airport and commercial districts of the city. Designed with corporate guests in mind, Centro Istanbul’s amenities include three dining outlets, Bodylines Fitness & Wellness Centre, indoor swimming pool, business centre, and meeting rooms.

Connected to Centro Istanbul, this Arjaan property will include 153 fully-furnished hotel apartments, three dining outlets, recreation and fitness facilities including a swimming pool – ideal for business travellers and holidaymakers alike. Located in the highly sought-after Günesli neighbourhood, guests will be able to enjoy all the benefits of the surrounding conveniences including shops, restaurants and a vibrant café culture.