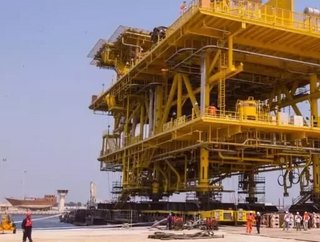 The Marham TP-9 Deck is part of the company’s program which covers the fabrication and installation of four oil producing platforms and associated pipelines and power cables.

Senior Vice President of Technical Services, Ahmed A. Al-Saadi, commented: “The completion of the massive 3,500 tons structure represents a major milestone for Saudi Aramco’s strategy to develop its offshore oil resources and to sustain the in-Kingdom manufacturing capabilities. This is the biggest offshore structure to have been fabricated to date in Saudi Arabia, and a major proof of the high level of technical competency and capability that in-Kingdom manufacturers have achieved.”

The platform was fabricated at Dammam Port by the STAR yard (Saipem Taqa Al-Rushaid Fabricators Company Limited) and is the product of a joint venture between Saudi Enterprises and Saipem.

The major initiative of fabricating platforms for the offshore oil and gas fields was the first of its kind in Saudi Arabia, and has recently been expanded with the opening of the newly established fabrication yard of McDermott International, another long-term offshore contractor of Saudi Aramco.

Al-Saadi added: “In my view there is an even greater significance to the work that’s been done here. At Saudi Aramco, our new mandate is Saudi Vision 2030, which calls for an accelerated and broad diversification of the economy, driven by entrepreneurship, technological innovation, and targeted investment.

“Our IKTVA localization program is a fine example of how we are putting this into practice. By establishing strategic partnerships with local manufacturers, and successfully executing projects in our vast offshore fields within extremely aggressive schedules, we are showing the world that our manufacturers are highly competent and customer focused. In fact, I believe that this can be expanded and extended nationally across many industrial sectors to create thousands of new, well paid, and highly skilled jobs for our young men and women.”