Africa biotech summit at University of Cambridge a resounding success 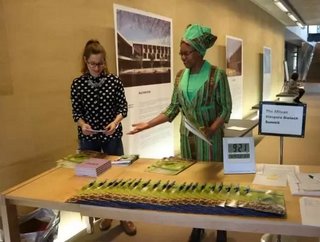 On 4 April, African Business Review attended the inaugural African Diaspora Biotech Summit. Located at University of Cambridge, UK, the conference invited students, academics and industry leaders from Africa and the diaspora to discuss the current state of Africa’s bioeconomy.

The Summit was run by JR Biotek Foundation. The organisation is student-led, not-for-profit and aims to boost STEM (specifically biosciences) in sub-Saharan African Africa. As a precursor to the Summit, the Foundation ran a Molecular Laboratory Training Workshop for African students between 27 March and 3 April.

The Summit took place at the Sainsbury Laboratory Auditorium, University of Cambridge

Carol Ibe, founder of JR Biotek Foundation, gave the Summit’s welcome address. “To our fellow Africans who are present here today,” she said. “I would say that it is time now for us to take the lead in encouraging our government to invest in quality education and training, so as to provide our young people and future generations with the right knowledge and skills that they need to compete.”

The University of Cambridge PhD student then introduced a keynote speech from Professor Lucy Ogbadu. Ogbadu is a Professor of Microbiology and Director-General of the National Biotechnology Development Agency (NABDA) at the Nigerian Ministry of Science and Technology.  With equal parts humour and passion, Ogbadu addressed issues such as funding, politics and education. She began and finished her rousing speech with the mantra, “only Africans can do it for Africa”.

The second keynote speech was delivered by Onyekachi Wambu, Executive Director of African Foundation for Development (AFFORD). AFFORD is a UK-based charity aimed at enhancing the impact that diaspora Africans can have on Africa’s development. Consequently, Wambu spoke about how Africans outside the continent can boost Africa’s bioeconomy from afar.

The Summit also included interactive panel-led discussions, in which the audience could quiz series of industry experts. The panels concerned food security, tertiary education, research & development and gender issues. Discussions were lively, yet cordial. The panel on the role of African women in biotech was particularly passionate. One audience member commented: “Women cannot contribute much, because we are the primary victims. Especially in Africa, where almost everything is wired against women.”

The final panel discussion: "The role of African women and the African diaspora in building a sustainable African bioeconomy"

The Summit closed on the NextGen Africa Bioinnovation Pitching Competition, where workshop attendees proposed innovative biotech ideas to a panel of judges.

When asked about the future of the Summit, Ibe replied: “We have plans for next year, or the year after, next year might be a little too soon.” Regardless, Ibe considered the event to be a success. “It’s amazing to learn and to hear other people’s perspectives,” she said. “I’m very, very happy. I learned quite a lot.”