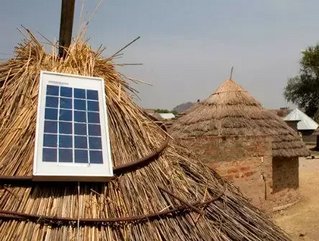 Azuri, the developer of Indigo pay-as-you-go solar power for off-grid markets, has secured a £1m working capital loan from Barclays to accelerate the deployment of its Indigo home solar systems.

Azuri is helping to transform the lives of thousands of rural customers in sub Saharan Africa forever by bringing affordable electricity to consumers in emerging countries that lack access to the grid.

Its award-winning Indigo technology and business model combines mobile phone and solar technology to deliver affordable pay-as-you-go solar power that replaces kerosene and phone charging services, while cutting users’ spend by as much as 50 percent.

Since the first Indigo deployments in Kenya in September 2011, the business has been recognised globally for its innovation in solar energy, winning major awards including the World Economic Forum Technology Pioneer 2013.

Independent research has shown that Indigo lights can extend users’ productive day by as much as 3.2 hours and that children with solar light on average spend an additional 2-2.5 hours per night on homework.

Access to electricity plays a crucial role in enabling economic and social development throughout the developing world.

Azuri’s Indigo already helps thousands of off-grid consumers in Africa to realise their aspirations through electronic access to the knowledge economy; a trend that is seen by the UN as critical to the continent’s long-term development potential.

Barclays’ support for Azuri is evidence of the company’s maturity in the market. The four-year term loan is the first step in a broader and longer-term relationship between the two firms and reflects Barclays’ commitment to supporting Azuri and towards economic and social transformation in Africa.

“This landmark deal represents a major step towards opening up the commercial finance sector for distributed rural power.”

Sean Duffy, Managing Director of Technology, Media and Telecoms Industry at Barclays, said: “Azuri is a highly innovative business, and is leading the way in distributing pay-as-you-go solar power for off-grid markets. We are fully committed to assisting the company’s growth and this campaign, which will deliver significant social and economic benefits in Africa.”