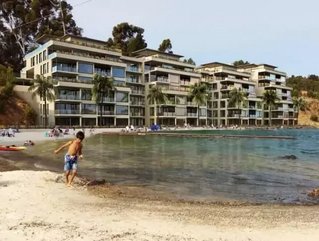 Lukas Reichmuth loves Swiss design. An ambitious businessman, Reichmuth was born in Switzerland, completed his master’s degree there, then stayed to work among its bold, historic buildings. While working, Reichmuth produced a brainchild – his Swiss-inspired architectural project management firm, Swisatec.

17 years on and Reichmuth’s passion for Swiss architecture has seeped to the other side of the world. Swisatec’s latest project, Blue Rock Village, will be built in South Africa. The development is set to become the first Green Village in Africa.

“I take pride in the Swiss heritage and you will see that in our design and style,” Reichmuth tells us. “My motto of design is environmentally friendly, green building and European style.”
The 14 billion rand Blue Rock Village will upgrade the well-known Blue Rock Resort, which rests on the Helderberg Mountain slopes and overlooks the crystal clear Lake Blue Rock. Without a doubt, the concept of the Village sounds wonderful. But why exactly does the African market need it?

“Not only for Africa, but in each and every part of the world we need to do as much as we can to preserve what we have for generations to come,” Reichmuth stresses.

Through his new project, Reichmuth aims to fulfil the universal demand for eco-friendly projects.  The green village is just that – green. Lush African foliage surrounds Blue Rock’s accommodation.
Reichmuth adds: “The biggest difference is that we don’t only focus on trees and landscapes. We make a difference by coming up with innovative ways of building, positively impacting the environment, and increasing human well-being.”

Reichmuth also mentions that Blue Rock Village solves a shortcoming of modern life. “Most of our lives are spent travelling from home to work,” he explains. “This takes away time that could be used to better enjoy our lives with our loved ones. Now, imagine a village where you can live, work and play. That’s our ideology.”

Work: Blue Rock Village will hold a Hotel and Conferencing Centre, consisting of over 150 rooms, 30 condos, and a centre for over 500 executives. There will also be the Dollar House, “a professional office space for bankers, lawyers, consultants and financial advisors”. For those who want to gain new skills, there will be a hotel school, IT school, graphic designing and language centre.

Play: After work is over, residents can relax in the village’s recreational facilities. The Wellness Centre boasts sports facilities, beauty and therapeutic centres. Additionally, the village will have boutiques, restaurants and cocktail bars.

“The live, work, play concept speaks to the young, mature, retirees, and the movers and shakers of industries. I believe in the village lifestyle, which all can enjoy – from young to the elderly.” Reichmuth says.

“We plan to venture to other countries. I believe that our way of building will change the construction industry not only in South Africa, but in other parts of the world,” he commented.

The Green Star SA Communities Rating tool (originally from Australia) evaluates the sustainability attributes of the development project, on a precinct, neighbourhood, or community scale. The tool is one of its kind in South Africa and is being adapted to the local context. If Blue Rock Village bags the 6-star rating, Reichmuth and his team would be elated.

“Being awarded the first 6-star Green Star Communities Rating will place Blue Rock Village as world class development and the first village in Africa to achieve such a status. This will add value to potential buyers and investors as this makes Blue Rock Village a prime address in Cape Town,” he comments.

Reichmuth and the Swisatec team are working hard to secure this rating and open up Blue Rock Village to the public. They envision that phase one of Blue Rock Village, Giovanni Luxury Terraced Apartment, will begin this September. Residents are expected to move in by December 2017.

If the launch goes as planned, Reichmuth’s ambitions to blend Swiss design, African landscape and eco technology will be fulfilled. He stresses the latter in his final comment: “Africa is at a point now that it's moving towards sustainable building, and I hope this will not be a trend, but a new way of living”.