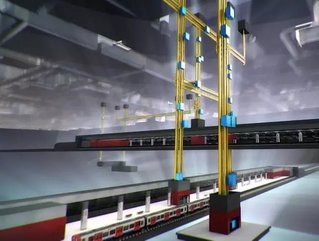 Elevator manufacturer thyssenkrupp has developed the MULTI solution, a Willy Wonka-style elevator which moves upwards and sideways which could hold the key to opening up access to Metro lines across Europe.

Thought-leaders from Transport for London (TfL), London First, Arup, WSP, thyssenkrupp and Weston Williamson gathered in London today in an exclusive panel debate to discuss the latest technology set to transform metro stations and bring them in line with 21st century demands.

Up for discussion was thyssenkrupp’s MULTI solution, referred to as the Willy Wonka elevator, which moves upwards and sideways.

With population growth and urbanisation driving more people to cities than ever before, metro stations – which are the beating heart of city life, transporting people from home to work and other daily destinations – are facing unprecedented challenges to mobility and efficiency.

In London alone the population is growing at a rate of 1.5 percent year-on-year, reaching almost 8.6 million in 2015. Implementing new technology at key city transport hubs is essential to get people from A to B as effectively as possible.

The panel debate came at an important time, as pressures on the London Underground – the world’s oldest underground transport network - continue to mount. Passenger numbers have risen 33 percent in the past decade and some 1.34 billion passengers use the underground every year.

As people’s lifestyles evolve and commuters seek to achieve a better work/life balance, transport hubs are also increasingly being developed into retail and dining locations; places people want to stay, rather than leave quickly. As seen so clearly in stations such as Waterloo and King’s Cross, metro hubs are now centres of human interaction, where people can enjoy a comfortable environment for commuting and leisure activities alike.

However moving people around transport networks easily and effectively is not an easy task. Metro stations are complex infrastructures that connect several rail lines overlapped in a very restricted space. The capital’s busiest tube station, London Waterloo, handles 95 million passengers every year and the deepest platform in the network is 58 meters below street level, at Hampstead. Commuting time and passenger comfort should be at the forefront of all considerations for re-designing these metro and railway stations to ensure they can accommodate the needs of the modern-day traveller.

MULTI is the world’s first horizontal/vertical ‘Willy Wonka’ elevator that can open up new directions of travel in underground transport hubs. MULTI breaks the 160-year tradition of rope-driven elevators and has been designed to increase passenger shaft capacity by 50 percent. It does this by enabling multiple cabins to travel safely up one shaft and down another in a single continuous loop, much like a circular shuttle. The only visible difference to passengers is that the doors can open every 15 to 30 seconds.

Andreas Schierenbeck, CEO at technology leader thyssenkrupp Elevator added: “MULTI was initially developed for tall buildings, to double elevator shaft capacity, reduce elevator footprint, and offer vertical and horizontal movement to enable architects to construct taller, more creative and more user friendly structures, but its concept makes it a prime solution to the challenges of metro stations as well. If applied it would undoubtedly change the face of London’s transport network, and reinforce the UK’s position at the head of global innovations. Yet it also offers a practical solution that could ease congestion in dozens of underground networks across the world too; a thought that makes you realize its potential to be one of the most revolutionary new developments of our time.”