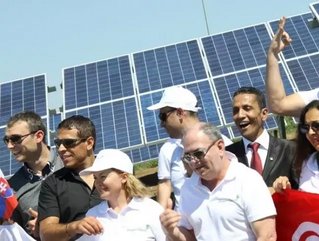 These are only some of the figures for the Power Clouds project which started in March 2013 and has with its impressive results swiftly become a unique success story in the field of renewable energy production.

Anybody, anywhere in the world who possesses a solar panel can apply to lease it to Power Clouds as part of their photovoltaic plants. The company in return pays to the owner a monthly fee for 20 years, guaranteed and independent of the performance of the plant.

The first plants have been constructed in Romania and during the summer 2014, construction of plants will start in Japan with the support of the Japan External Trade Organization – JETRO, a governmental agency for the attraction of investments under the aegis of the Japanese Ministry of Economy, Trade and Industry.

Procedures to assess the construction of plants in France and in the United States are also underway.

CEO of Power Clouds, Roberto Forlani, said: “Power Clouds is supported by thousands of people who believe in the philosophy of the project and share its spirit and values. The next three years will be characterised by an ambitious development plan that will lead us to reinforce our commitment in Japan and at the same time to open new plants in other countries.

“We intend to evaluate the realisation of power plants in France and in the United States. France has understood the importance of renewable energies. The declarations made by the Ministry of Environment Ségolène Royale make us strongly believe in the development of the field.

“The mission of Power Clouds is to create the biggest network of photovoltaic plants in the world, through a process that will involve individuals who will put their efforts together towards a common goal and thus change things.

“The ultimate aim is to trigger a mechanism starting from the bottom and capable of obtaining economic returns guaranteed in time for those who take part in the project, and to fight climate change, which is putting the lives of entire populations and the future of our children in danger.”

For more information on the project see: www.powerclouds.com