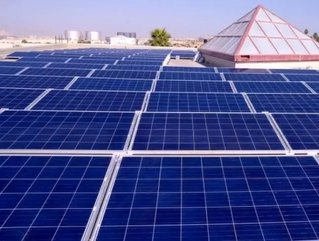 The company aspires to reduce its nonindustrial energy consumption by 35 percent by the year 2020 through the installation of energy efficient LED lights, the testing and installation of solar panels and other renewable energy sources, and the application of new standards and requirements related to thermal insulation in homes and buildings.

The solar installation was meant as a test of the performance of the footprint of a commercial rooftop photovoltaic system against energy demand during peak hours in the Eastern region of Saudi Arabia. The operation and maintenance of the photovoltaic solar system was closely monitored. The building chosen for the test was named the Star Building.

“Months ago, we opted to have the Star Building as a model in energy efficiency for all major buildings to come,” said Ahmed Morsy, a KAUST graduate who joined Saudi Aramco’s Power Systems team in 2012. “We conducted an energy audit of the building, which set a recommendation for a solution where lighting was changed to efficient LED in renovated wings, and smart meters with sub-metering capabilities were installed to closely monitor consumption.”

Building energy audits are being used to identify efficiency opportunities throughout commercial and residential buildings.

The solar installation consists of 144 PV modules interconnected to the existing electrical system, ensuring the delivery of about 35 kilowatt peak (kWp) of power. Over its lifespan, the project will generate 1.2 million kilowatt hours (kWh) of clean energy, mostly during peak-demand time of the day, when energy is most needed.

This clean energy offsets the energy produced by fossil fuels, thereby saving the Kingdom’s associated oil resources for future use.

The project is also Smart Grid compatible, and when connected, will provide enough energy equivalent to light more than 50 homes every year for the next 20 years.

The project is also an environmental-friendly construction. The production of 1.2 million kWh of solar energy avoids emission of 900,000 tons of CO2 gases over the life of the project, which is equal to carbon sequestered by 670 acres of trees.