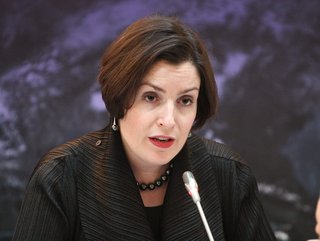 The first female to lead a bank in Ireland, Francesca McDonagh is leaving Bank of Ireland to become CEO EMEA for Credit Suisse amid leadership reshuffle

Francesca McDonagh, one of Ireland’s leading female executives, and the first to lead a bank in Ireland, is leaving her role as Bank of Ireland chief to become CEO of Credit Suisse for the EMEA region.

This move comes just weeks after Credit Suisse’s long-serving CFO David Mathers leaves, and as the bank begins a major management reshuffle as it looks to improve on what has been a shaky 2022 start for the firm.

The Swiss lender saw losses of €266m in the first quarter, in part thanks to legal expenses and a charge related to its Russian exposure.

Francesca, 47, will begin her new executive role in Switzerland on 1 October 2022, taking over from Francesco De Ferrari, chief executive of Credit Suisse’s wealth management division, who has been interim CEO EMEA since the start of the year.

First female CEO to lead a bank in Ireland

Credited with being the first female chief executive of a bank in the Republic of Ireland, London-born Francesca has led the Bank of Ireland – the country’s largest lender – for the past five years.

She has been described by the Bank of England as an “exceptional chief executive” with the bank having “prospered” under her leadership, according to the Irish finance minister.

Francesca has led the transformation of the bank’s culture, systems and business model, seeing through the IT transformation programme, and also driving a change in culture within the bank.

Insisting that a good culture is not a ‘nice to have’ but a ‘must have’, Francesca spearheaded key inclusion initiatives such as mandatory D&I goals for senior leaders, Group D&I training, LGB T+ allyship training for Group Executives, regularly reviewed D&I success measures, and was recently recognised for her commitment to breaking down barriers at the bank and creating more inclusive workplaces, ranking second in INvolve’s Top 50 Ally Executives list for 2021.

Since joining the bank in 2017, Francesca has undertaken significant deals acquiring Davy Stockbrokers and most of KBC Ireland, has reduced taxpayers’ stake in the lender to below 5%, navigated the pandemic successfully, and accelerated the move away from branches towards more online banking, shutting 100 branches in Ireland in 2021 to save costs.

According to a statement by Bank of Ireland chairman, Patrick Kennedy, she has “driven – with ambition and commitment – a clear strategic focus on transformation, service improvement, and business growth”, and has also helped to deliver a “more efficient, digitally-enabled, customer-focused and profitable bank”.

Prior to joining the Bank of Ireland, the Oxford University graduate was at HSBC for two decades, where she held a number of senior leadership roles in private and investment banking along with wealth management.

Joining HSBC’s investment banking division aged 22 as a graduate trainee, Francesca worked her way up the banking ranks most recently serving as Head of HSBC’s retail banking and wealth management business in the UK and Europe.

Her two-decade-long career there led her to work in seven different countries, including leadership roles in Asia, Latin America, the Middle East and Europe.

In 2017, just prior to joining Bank of Ireland, Francesca was awarded an OBE for services to banking, and two years later was made a Fellow of the Irish Institute of Banking. She was named a Young Global Leader of the World Economic Forum in 2014.

Fluent both in English and Spanish, Francesca is a member of the UK Prudential Regulatory Authority Practitioner Panel, sits on the board of Ibec, and previously served on the board of the British Bankers’ Association.