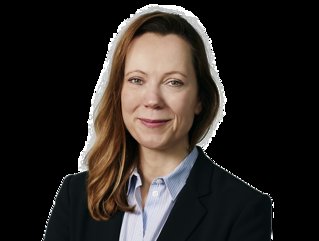 These eight women in sustainability leadership in Europe are helping to shape the future, according to sister publication Sustainability Magazine

Sister publication Sustainability Magazine has revealed its inaugural Top 100 Women in Sustainability list, celebrating not just the ascent of women in the corporate world, but the rising adoption, acceleration, and practice of sustainability worldwide.

“The women featured in this list are extraordinary people whose impact we feel every day and whose work is shaping the future, and our present, as we live in it,” says Sustainability Magazine editor Blaise Hope.

Here, we highlight the top eight women in sustainability in Europe, all of whom hail from a wide range of industries and countries, from Finland and France to Denmark and the UK, and from entertainment and energy, to luxury fashion and the financial industry.

Considered a master of renewable energy transformation on all dots of the public-private continuum, Lisa Ekstrand has worked at Copenhagen-headquartered Vestas, a firm that makes, installs and maintains wind turbines, for nearly 13 years. Beginning as a Policy Adviser for Group Government Relations and working on policy and regulatory environments across the Nordics, Lisa worked her way up the senior leadership ranks, serving as Senior Policy Specialist EU, Head of Global Public Affairs and ultimately Vice President Sustainability, a role she has been in for four months.

Copenhagen-based Ida Krabek leads sustainability at Orsted, a company at the very forefront of climate change, having transformed itself over a decade from an oil giant (Danish Oil and Natural Gas – DONG) into the world’s biggest offshore wind developer (Orsted).

Joining Orsted in 2013, then DONG Energy, as Stakeholder Relations Officer, Ida worked up to ONG’s Senior Sustainability Advisor before becoming Head of Group Environment for the rebranded company, Orsted, moving up to Head of Global Sustainability in 2021. Her knowledge of public policy did more than inform her corporate work. Ida served as Assistant Attache to the Permanent Mission of Denmark to the UN in New York. She earned her bachelor’s in political science at the University of Copenhagen and her master’s in global governance and ethics from University College London.

As Chief Sustainability Officer and Head of International Institutional Affairs at Kering since 2012, Paris-based Marie-Claire Daveu is responsible for building the luxury conglomerate’s sustainability strategy and for operationalising it across and with the Group’s Maisons, including Balenciaga and Gucci. In this role, which she has occupied for nearly a decade, Marie-Claire is dedicated to helping to create a future where the fashion and accessories industry is circular, decoupled from relying on large amounts of new natural resources.

Throughout her career in both the private and public sectors, including as Senior Director of sustainable development at Sanofi and Chief of Staff at the Ministry of the Ecological Transition, Marie-Claire has been committed to promoting sustainable stewardship in business, empowering women leadership and championing animal welfare. she is a member of a number of boards, including Groupe Credit Agricole and Saft.

As Sustainability & CSR Vice President since 2018, Cecile drives the company’s sustainability and CSR strategy and policies, local communities’ investment program, compliance and annual reporting activities, sustainability in tenders, and relationships with non-financial rating agencies and investors. She is also global diversity champion for the company and a member of the board of Alstom Foundation. With Alstom for 17 years, Cecile joined as an environmental analyst in 2005 becoming Sustainability Director for Alstom Transport six years later.

Prior to Alstom, Cecile was at KPMG for over five years, as a manager in the sustainability department, leading technical and financial assessments of environmental issues in the frame of M&A projects. She also managed the verification of sustainability indicators for industrial and retail customers, including Lafarge Ciments and Carrefour.

A trained civil engineer, Cecile kicked off her career as an environmental manager consultant at French National Institute for Environment and Risks. She is a member of Chapter Zero Frane, an initiative that promotes the management of Climate issues at Board level since December 2020.

An experienced project manager with a focus on environmental issues and two decades of expertise in sustainability management and strategy, Satu Man has been Director of Sustainability & Stakeholder Engagement at Metso Outotec, a Finnish firm that supplies equipment for the mining, aggregates, recycling and process industries, for nearly two years. She speaks Finnish, Swedish and English, which helps within her stakeholder engagement role at Metso Outotec.

Prior to Metso, she spent more than eight years with Big Four firm PwC Finland, as a manager in the sustainability and climate change team, working mainly with large corporates and responsible for leading sustainability management, reporting and assurance services.

She began her career at URS Corporation in London, where she spent nine years as a Senior Sustainability Consultant. Satu studied Environmental Technology at Imperial College London and later Ecology at Queen Mary University of London.

An experienced sustainability and safety and environmental global programme director, Angela Ballesteros has more than two decades of experience working across different industries as diverse as oil and entertainment and in both the UK and the US.

Joining Sony Pictures in 2014 as Environmental Affairs Manager, Angela has worked her way up over eight years to International Sustainability and EHS Director. Prior to Sony, she spent 12 years with BP, based in California, first as an environmental engineer and then as a Health, Safety and Environmental Advisor for BP Lubricants, serving both commercial and industrial markets, as well as working on the formerly BP-run Carson refinery.

Angela is a graduate of both Cambridge and the University of Southern California with a master’s in environmental engineering.

Kristina Kloberdanz joined Mastercard in London as VP of Corporate Sustainability five years ago and within a year had been promoted to Chief Sustainability Officer. Prior to Mastercard, Kristina spent nearly 25 years at IBM where she worked across countries and business functions, including in Brazil, Russia and the US, and in wireless solutions and sports and entertainment sponsorships.

Kicking off her career there as a marketing manager, Kristina held increasingly senior positions including as marketing leader on executive events where she developed and executed the company-wise sponsorship strategy and as corporate responsibility leader for the Corporation, overseeing IBM’s global CSR strategy and brand reputation.

For nearly two decades, German national Ulrike Sapiro has been a leader in global sustainability and ESG strategy, policy and partnerships with a focus on water security, resilience, agriculture, circular economy, human rights and climate along the value chain.

Fluent in Dutch, English and French, Ulrike has a master’s degree in political science and postgraduate qualification in sustainable development from Cambridge University. She serves as a Board member of Trustees for Water & Sanitation for the Urban Poor.