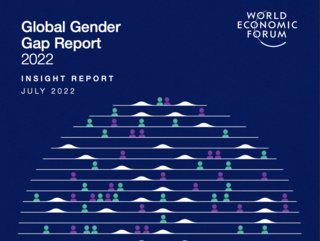 While North America is the best-performing region, with 76.9% of its gender gap closed, Europe is hot on its heels at 76.6%, clocking an improvement of 0.2% since 2021, and resulting in a 60-year wait until the gender gap is closed (compared to the staggering 132 years global average).

European countries take six spots in the top 10 most gender-equal, with Ireland at #9 and Germany #10, while two countries in Africa also feature – Rwanda (#6) and Namibia (#8). And nine of the 35 counties in Europe have improved their score by at least 1% with Albania, Iceland, and Luxembourg the region’s three most improved countries. 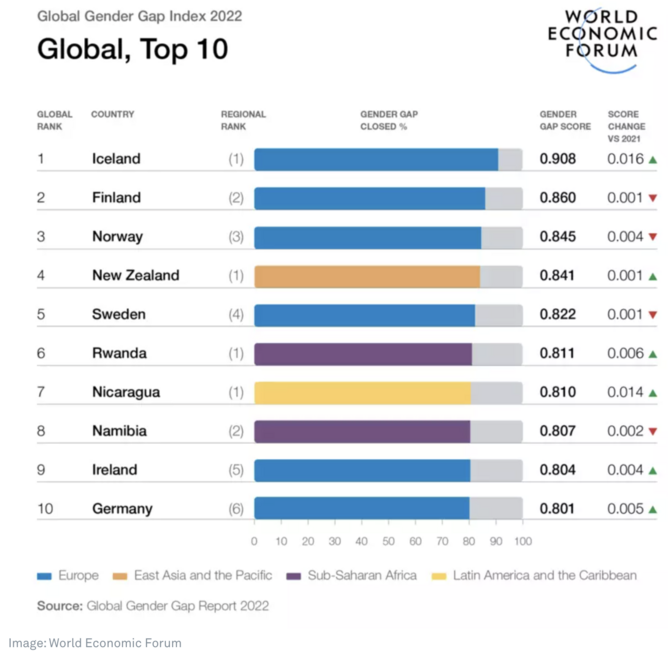 But while it’s good news for these countries, from a global perspective, the latest data on remains bleak, with estimations that it will take another 132 years to close the gender gap, compared to 136 years in 2021 – showing that progress made over the last year has been slow, reducing the time to gender parity by just four years.

According to the report, of the 146 economies surveyed, just one in five has managed to close the gender gap by at least 1% in the past year.

The Middle East and North Africa (MENA) is one region of particular concern, with the second-largest gender gap yet to close. While some progress has been made in closing the economic gender gap (+2%), thanks some countries like the UAE and Israel improving the share of women in technical roles, the region has made little progress overall and has 115 years to close the gap, nearly double that of the US.

Not only has the gender gap not yet bounced back from its erosion during the pandemic, but now the cost-of-living crisis is further impacting women disproportionately.

Global gender parity for labour force participation had been slowly declining since 2009, but this trend was exacerbated in 2020, thanks to the pandemic, when gender parity scores decreased precipitously over two consecutive editions.

This negative impact is in part explained by the disparities in care responsibilities that were exacerbated by the pandemic, with the majority of care work falling on women as childcare facilities and schools were closed.

According to the WEF’s Managing Director, Saadia Zahidi, now this “cost-of-living crisis is impacting women disproportionately after the shock of labour market losses during the pandemic and the continued inadequacy of care infrastructure”.

In the face of a weak recovery, Zahidi urges government and business to make two sets of efforts. The first, implementing targeted policies to support women’s return to the workforce, and the second, women’s talent development in the industries of the future.

“Otherwise, we risk eroding the gains of the last decades permanently and losing out on the future economic returns of diversity,” she says. 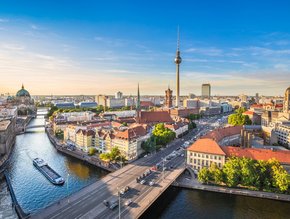