1 in 4 firms plan to use quantum technologies, say Capgemini Recent breakthroughs in quantum technologies mean mass adoption may occur within the decade, and 24% of firms are engaging with quantum, reports Capgemini

Almost a quarter (23%) of organisations are working, or planning to work, on leveraging quantum technologies, with expectations of at least one major commercial application within the next 3–5 years, and one in five expect to increase investments in the technology in the next year, according to new research by the Capgemini Research Institute.

In Europe, the Netherlands (42%) has the largest share of firms working on or planning to work on quantum technologies, nearly as many as quantum world leader China (43%) and well ahead of Germany and the UK (26%), the US (22%) and the global average (23%). In France, 23% are engaging with the technologies, while Spain and Italy are lagging with 14% and 15%, respectively.

While most businesses began working on quantum more than two years ago, 28% say they have started in the last two years.

Research suggests that quantum technologies – quantum computing, quantum communications, quantum sensors – are beginning to move out of research environments and into real-world applications, with 20% of those working on quantum having reached implementation stage (experiments or proofs of concepts) and a further 23% having identified relevant use cases and prepping for implementation.

In fact, recent breakthroughs in quantum technologies mean that mass adoption may occur within this decade.

“Recent breakthroughs in quantum technologies are heralding a new era for computing, sensors and cybersecurity within the next 5 years,” says Pascal Brier, Chief Innovation Officer at Capgemini. “Our research confirms that more and more organisations are getting educated about the technology and experimenting with real-life quantum technology applications. In the past two years, we’ve seen leaders emerge in the financial industry and a lot of traction in automotive, in particular.”

How organisations will leverage quantum technologies

These companies intend to leverage the technology in various ways, from improving sustainability in operations, and discovery of new materials for battery manufacture, to securing information, through to medical sensors and mitigating harmful industrial gases.

According to Elham Kashefi, Professor of Quantum Computing at the School of Informatics, University of Edinburgh, it could take another decade to build a fault-tolerant, universal quantum computer, but “we can still get real impactful applications on quantum devices in the near future provided we optimise and adapt Quantum algorithms for the emerging noisy hardware equipped with tailor-made verification processes”. 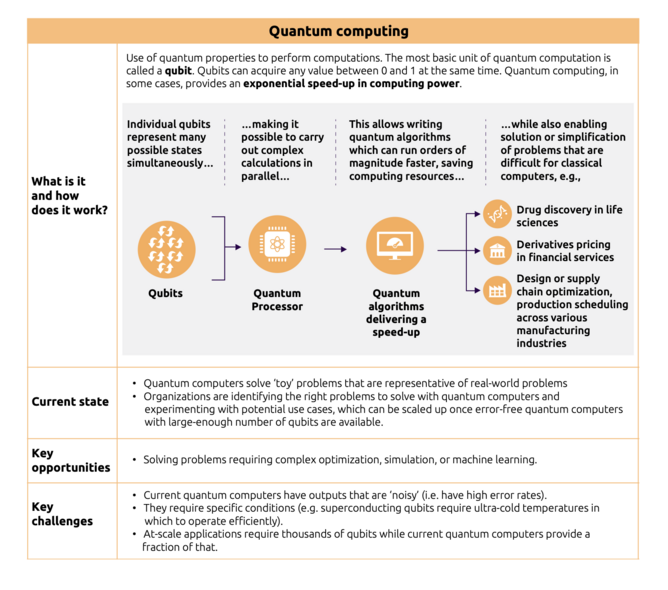 Quantum technologies – where are we now?

The report highlights that quantum technologies have reached different levels of maturity in terms of expected applications, but most firms believe the first commercial quantum computing applications are still five years away.

Getting ready today is critical if organisations plan to capitalise on these new-generation technologies when commercial applications become mainstream.

Seven in ten organisations working on quantum agreed that due to long product development cycles in their businesses, they need to invest time now in building a base (the right skills, identifying problems/use cases, conducting lab experiments, or striking partnerships) and integrating quantum technologies into their processes.

More than half (58%) of those working on quantum said they had secured C-level support for quantum initiatives in the last year.

Even as large-scale commercial applications are a few years away, the report advises that organisations can start preparing now for the quantum advantage – the ability to drive significantly higher performance than what is possible with the current state of technology.

Once the use case is established, firms can start experimentation with a small team of experts. Further, translating the most potent use cases to small-scale quantum experiments, striking long-term partnerships with technology providers, and developing a long-term strategy to scale up quantum talent will be crucial.