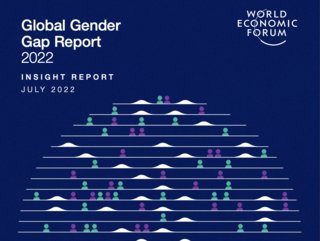 With the second-largest gender gap yet to close, the MENA region must take action now, urges new WEF report – and the business case is compelling

It’s no secret that the pandemic and its economic fallout has had a truly regressive effect on gender equality. Nor that little action is being taken to counter these effects.

Recent research by the University of Washington revealed that the greatest and most persistent gender gap has been seen in employment, with 26% of women reporting loss of work compared with 20% of men globally – clear evidence that Covid-19 has exacerbated previously existing social and economic disparities.

And, according to the London School of Economics, 64 million women globally lost their jobs during the pandemic, with women’s jobs nearly two times more vulnerable than men’s.

And just as we begin to recover from the impact of the pandemic, the cost-of-living crisis kicks in, once more putting women in the firing line – and potentially putting to bed hopes that gender equality can build back.

Sadly, the latest figures from the World Economic Forum make for grim reading. Not only has the global gender gap – made worse by the pandemic – not bounced back, but the cost-of-living crisis is continuing the job of Covid-19 in impacting women disproportionately.

The WEF says that global gender parity for labour force participation had been slowly declining since 2009 in the Global Gender Gap Index, but this trend was accelerated in 2020, thanks to the pandemic, when gender parity scores dropped precipitously over two consecutive editions, putting gender parity in the labour force globally at 62.9% – the lowest level registered since the index was first compiled.

“The cost-of-living crisis is impacting women disproportionately after the shock of labour market losses during the pandemic and the continued inadequacy of care infrastructure,” says Saadia Zahidi, Managing Director at WEF. 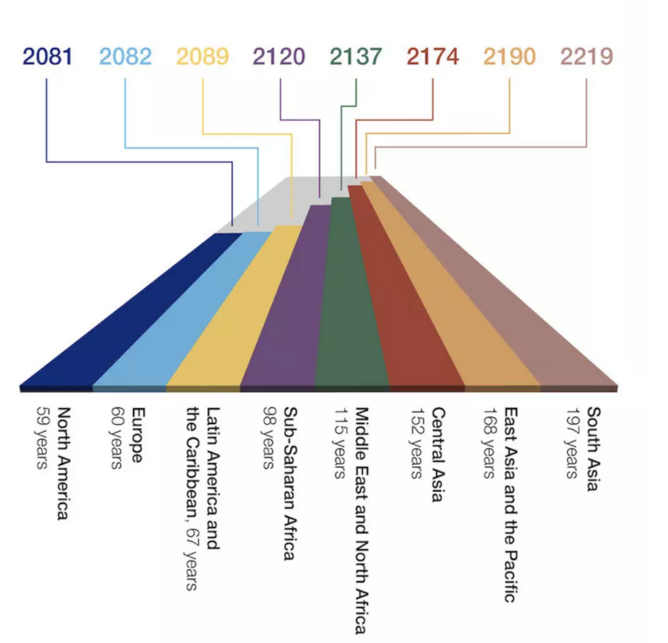 At current pace, when will these regions close the gap?

MENA region will take 115 years to close gender gap, double that of the US

Just like inequality in gender, inequality in global regions also exists. While North America and Europe are the best-performing in gender-equality, with the gender gap closed by 76.9% and 76.6%, respectively, MENA and South Asia are falling behind.

Lagging the US and Europe by more than 13%, the Middle East and North Africa (MENA) has the second-largest gender gap yet to close reaching just 63.4%, according to WEF data. While some progress has been made in closing the economic gender gap (+2%), thanks to countries like the UAE and Israel improving the share of women in technical roles, the region has made little progress overall. It will take 115 years to close the gap, nearly double that of the US.

According to PwC’s MENA Women in Work Survey 2022, female participation in the workforce across the region currently stands at between 20-40% for most countries, with the Gulf countries ranking highest and Egypt and Jordan lowest.

And while the report acknowledges significant gains were made in female participation in the workplace, from 1990-2019, thanks to more women being highly educated and an increasing number of entrepreneurs, the Middle East delivers the lowest female labour force participation globally. 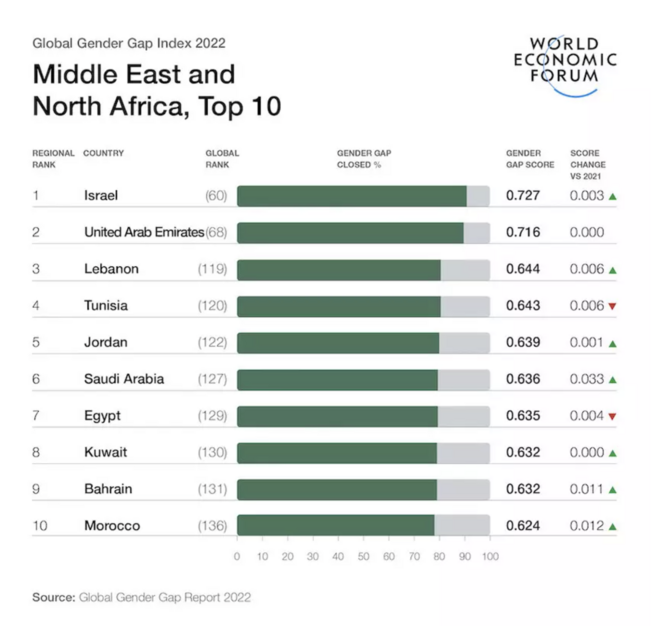 The business case for gender equality in the workplace is compelling

When it comes to the MENA region, where female participation in the workforce lags many other regions, the GDP potential is greater still, according to PwC’s MENA report.

The research finds that by bringing female employment rate on par with that of males, the region could witness a massive GDP hike of 57% or as much as US$2 trillion.

The story is similar in Africa. Research from the IMF shows that countries ranked in the bottom 50% for gender equality globally, among them large African economies like Ethiopia and Nigeria, could add a staggering 35% to their economies by bringing more women into the workplace.

Entrepreneur and philanthropist Awamary Lowe-Khan, who has been directly empowering women in Africa through her NGO The Woman Boss, recently told Business Chief that more women than men in Africa hold college degrees, and that most entrepreneurs in The Gambia and other African countries are women.

“Women in Africa have been putting children through school and reinvesting in their homes for generations,” she says.

Both regions have massive potential. Not only are women more highly educated in the Middle East than ever before, with 34% of women in Egypt and Saudi Arabia STEM graduates, a much higher proportion than in the US (22%) – but the region is home to an increasing number of female entrepreneurs, with 10-20% of startups regionally led by women, according to an ArabNet study.

This positions the MENA region with a potentially competitive advantage. Globally, women are underrepresented in STEM fields, according to the WEF, with nearly four times as many men as women graduates in ICT and in engineering and manufacturing globally.