Ethiopia: A story of feast and famine 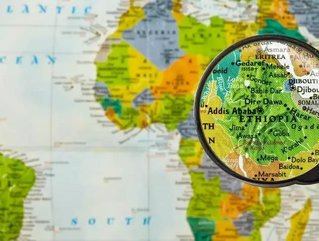 Moved by the plight of the Ethiopian people struggling with famine in 1984, Sir Bob Geldof launched Band Aid and raised millions of pounds in doing so, inspiring many other countries to do the same.

More than 30 years on and the lyrics of “Feed the World” have not been forgotten and nor has that picture that was broadcast around the globe; starving, malnourished children staring meekly from our television screens.

But while it may have traditionally lagged behind other nations on the continent, the east African country is keen to shake off its negative image. In fact, the government plans to make Ethiopia a middle-income country by 2025.

Average economic growth has been 10% for the last decade, due in part to a change in government policy that engages private business and encourages investment.

The new ‘African Lion’ is close to meeting several important Millennium Development Goals of the United Nations, according to the World Bank. The main generator of foreign exchange, which for many years was coffee, is now Ethiopian Airlines, the country’s national airline. A report by British accounting firm PwC found that tourism arrivals are expected to reach 918,010 in 2017, a rise of 5.7% in the past year.

Intrepid Travel offers 11 different itineraries to Ethiopia, with trips largely designed around local events and festivals such as Timket, Meskell, Mariam Tsion, and Palm Sunday. It has seen significant growth in the numbers of people wanting to travel to the country, and is launching a new itinerary in 2018 to keep up with demand.

“Ethiopia has recently become a much safer place to visit, meaning that more and more people are becoming less hesitant to visit this fascinating destination,” says Jenny Gray, regional product manager for Africa at Intrepid.

“The Carlson Rezidor Hotel Group identified Ethiopia as one of the countries in Africa where we could have scaled growth across our brands in a number of market segments where we can offer 5-star Radisson Blu hotels to 3-star Park Inns by Radisson,” he adds.

“Ethiopia is the second-most populous nation on the African continent after Nigeria, currently home to over 100mn people. It is also the most populous landlocked country with the third largest diplomatic community in the world.”

Ethiopian Airlines, which currently operates 1,681 weekly flights and 240 daily flights to the country, plans to increase annual revenue from $2.71bn in 2016/17 to $25bn by 2025. In order to do that, it announced in August that it will be adding 59 aircraft to its fleet of 92 over the next eight years.

Addis Ababa Bole airport, which has seen several developments over recent years, is currently undergoing a US$345mn expansion project, funded with a loan from China’s Exim Bank and is being constructed by China Communications Construction Company Ltd. When complete, the airport’s passenger handling will increase from seven to 27mn.

Girma Moges, founder and director of Tadele Travel, says that the country is unique in combining ancient culture and history with extraordinary dramatic landscapes.

“The Rift Valley mountain ranges in Ethiopia are numerous – with the Simiens perhaps being the best known,” she explains.

“The country is also rich in endemic wildlife, particularly birdlife. Ethiopia also has a wonderful culture of hospitality – its people are welcoming and warm – and the fact that the country has never been colonised gives it a unique experience in the region.”

Low labour costs and the close proximity to Europe has resulted in a recent boost to the leather and textiles industry in the country. Pittards, the UK leather products manufacturer, which acquired the Ethiopian Tannery Share Company in 2009, opened a new factory in Addis Ababa in 2011. Chinese footwear manufacturer, The Haijian Group, which has been manufacturing in the country since 2012, has, alongside the China-Africa Development Fund, committed to investing $2bn over the next 10 years. This is expected to lead to employment for approximately 100,000 Ethiopians.

Chinese investment in Ethiopia, and in fact in Africa as a whole, has increased exponentially since 1995 when the former Ethiopian Prime Minister Meles Zenawi signed an economic cooperation agreement with China. A series of forums on China-Africa co-operation followed, with the 2003 forum being held in Addis Ababa.

In 2006, it was announced that a China-Africa Development fund would be set up to invest in agricultural, industrial, natural resources and infrastructure projects across the continent. A port has been built in Nigeria, cotton farms have opened in Malawi and a power plant has been built in Ghana, amongst many other projects.

In 2011, China was both the largest importer and exporter in Ethiopia, with the Ethiopian government keen to learn from a nation which, over the last 30 years, has seen its economy expand to become one of the world’s largest.

The impact of this partnership and the resulting investment can be seen country-wide. Addis Ababa has experienced a construction boom, with new roads and buildings, as well as the $475mn Addis Ababa rail project, which opened in 2015.

But the shanty towns, so much a feature of Ethiopia, are still there. Electricity cuts still occur and the internet speed is notoriously slow. Residents of the Gambelle region have voiced complaints that they were forced off their ancestral land in order to make way for building work.

Travel companies such as Intrepid are keen to stress the importance of considering local people and supporting locals when travelling. “As the country opens up we encourage travellers to be mindful of the choices they make when travelling, to respect and benefit local people,” says Gray.

Ethiopia is certainly a country to keep a watchful eye on, especially for the opportunities it offers international businesses. Marriott Hotels International has two locations in the country and is happy with the growth in business it is seeing.

“The country has so much to offer both for business as well as the leisure traveller. Addis is also home to Africa’s largest airline, and the seat of the African Union. As such, it is strategically important and a key hotel market.”

Ethiopia has a long way to go before its past is ever truly behind it, but there is certainly a lot more hope surrounding this extraordinary country, as it begins, what appears to be, an exciting transformation.