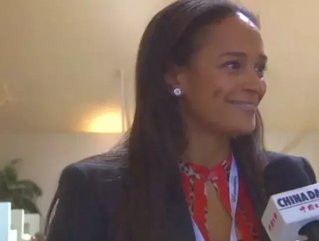 The continent is awash with go-getting entrepreneurs of the female kind and it is a hard choice when it comes to choosing the best, however, here is the pick of our favourite girls who are doing it for themselves:

10. Vera Songwe is a Cameroonian who is the World Bank’s Country Director for Senegal, Cape Verde, The Gambia, Guinea Bissau and Mauritiana, based in Dakar, Senegal. She joined the bank in 1998 as a young professional in the East Asia and Pacific Region and has worked on several countries and regions including Cambodia, Morocco and Tunisia.

9. Wendy Ackerman is a non-executive director of the leading South African grocery chain Pick ‘n’ Pay. She and her husband, Raymond Ackerman, run the Ackerman Family Trust which owns about 50 percent of the $3 billion retailer. She was appointed as a director in 1981 and was responsible for Employee Liaison, Staff Benefits and Welfare.

8. Hadeel Ibrahim is the founding Executive Director of the Mo Ibrahim foundation, which was established in 2006 to support great African leadership. She is also a member of the Boards of the Mary Robinson Foundation – Climate Justice, Carter Center UK, Refugees International and the Institute of African Leadership for Sustainable Development in Tanzania.

7. Sibongile Sambo is a highly educated entrepreneur having several degrees under her belt and is the founder and Managing Director of SRS Aviation, the first 100 percent black female-owned aviation company which offers clients professional and personalised flight options to destinations around the world. She previously gained experience working for the likes of Telkom, City Power and De Beers.

6. Monica Musonda is a dual qualified English solicitor and Zambian advocate who achieved her entrepreneurial vision of bringing affordable nutrition to the southern African market through her food processing company, Java Foods, of which she is both founder and CEO. She previously worked for Africa’s richest man, Aliko Dangote, of Dangote Industries ltd.

5. Bridgette Radebe has made it big in mining and as the Executive Chairperson of Mmakau Mining. She was involved in the South African Mineral & Petroleum Resources Development Act and the Mining Charter. She started Mmakau Mining, which initiates explorations and helps to produce platinum, gold and chrome.

4. Rapelang Rabana is a young, hot-shot, South African entrepreneur who knew from the start exactly what she wanted. Shortly after finishing her studies at the University of Cape Town and at the tender age of just 23, she co-founded Yeigo Communications, which became one of the first companies in the world to offer VoIP (Voice over Internet Protocol) services for mobile phones.

3. Eva Muraya is Chief Executive Officer and founder of Brand Strategy and Design Ltd. She has won many accolades and awards for her brand building and advertising skills which have benefited many big companies including FedEx, Xerox and Equatorial Commercial Bank. This go-getter believes you don’t get any results without hard work.

2. Hajia Bola Shagaya is Nigeria’s richest businesswoman and the entrepreneur has secured interests in oil, banking, communications and photography, as well as a huge investment in real estate spanning several major cities. She is Managing Director of Practoil Ltd, one of Nigeria’s largest importers and distributors of base oil and was on the board of Intercity Bank (now Unity Bank Plc) for more than eight years.

1. Isabel dos Santos is an astute businesswoman, who holds the title of being Africa’s first female billionaire as well as being the daughter of Angolan President Jose Eduardo Dos Santos.

Still only in her early forties, Dos Santos has always shown an entrepreneurial flair having set up her own restaurant called Miami Beach at the tender age of 24. She holds an engineering degree after studying at King’s college, London, and swiftly made her mark on the business world by divesting her interests in a number of sectors including banking, TV and media businesses.

Her assets include a 19.5 percent share of Banco BPI, one of Portugal’s largest publicly traded banks worth an estimated $465million and she also has substantial shares in Portugal’s biggest cable TV company ZON worth about $385 million. She also owns a 25 percent stake in one of Angola’s largest mobile phone networks, Unitel.