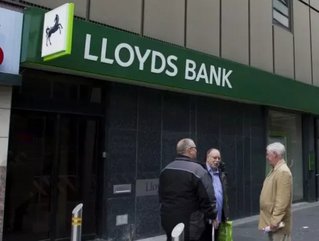 Lloyds Banking Group’s six-month results reveal profit has fallen by more than 50 percent compared with the same period in 2013, down to £863m (pre-tax) after a £1.1bn charge for "legacy issues".

These included £600m set aside as compensation for mis-sold Payment Protection Insurance and the £226m fine for the Libor interest rate-rigging scandal. The 24 percent taxpayer-owned bank's total bill for mis-sold PPI now stands at £10.4bn.

However, with underlying profits, (the Bank’s preferred measure), up almost a third percent to £3.8 billion for the six months to the end of June, Lloyds said it would go ahead with plans to restart dividend payments to shareholders.

These payments have been blocked since the bail-out in 2008, but in light of the “strengthening economic recovery”, the bank said it would be applying to the Bank of England’s Prudential Regulatory Authority (PRA) to restart dividend payments, commencing at a modest level in the second half of 2014.

Company Chief Executive António Horta-Osório said: “In the first half of 2014, we continued to successfully execute our strategy, further enhancing our leading cost position and low cost of equity, by investing in the products and services our customers need and further strengthening and de-risking our balance sheet, reducing costs and increasing efficiency. As a result, we substantially improved our underlying financial performance and delivered a statutory profit, despite further charges for legacy issues.”

Apologising for the Libor episode, for which the bank was fined on Monday, Horta-Osório called it “as shocking to us as it was to you” and said: “This is totally unacceptable and we condemn this without reservation […] I am sorry for the impact these individuals (certain Lloyds traders) have on our colleagues and shareholders."