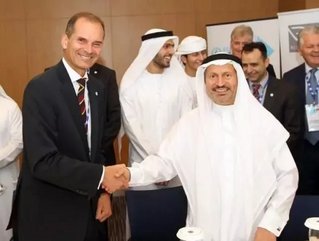 The agreement, which could be expanded, comes on the heels of Binghatti’s recent AED250 million investment in the company’s KIZAD-based production facility.

“We are very happy to have reached this agreement with Binghatti,” said Niels Hougaard, the Managing Director at Tetra Pak Arabia Area. “They are the gold-standard of the regional FMCG sector and, with our equally respected manufacturing and packaging expertise, we think this is a mutually beneficial agreement that guarantees quality at all stages of the process.”

Binghatti is widely known for the RAUBI brand of juices. The KIZAD facility will be capable of producing 10 million cases in its first year, with the capability of increasing to 40 million cases per year upon completion, all destined for the MENA region.

“Tetra Pak sets the world standard when it comes to processing plants,” said Ahmed Binghatti, CFO and Head of Investments at Binghatti Holding. “The fantastic team at Tetra Pak has done an excellent job of tailoring the perfect solution for our requirements and we are very much looking forward to further developing our relationship with Tetra Pak.”

Installation of the production lines is anticipated to start during Q1 of 2017 with the first commercial production run expected towards the end of Q2 2017. The FMCG products from Binghatti’s proposed plant in KIZAD will be distributed in the UAE and exported via Khalifa Port to countries across the MENA region with plans to expand exports to Europe and the Far East.

RAUBI is supported by Binghatti’s own FMCG distribution companies in the UAE, Lebanon, Jordan, Iraq and London.