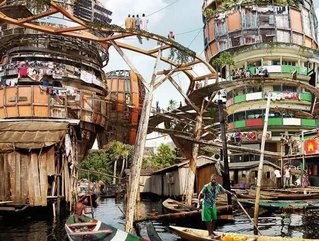 Jeyifous, based in New York, aimes to draw attention to poor standards of living within deprived settlements.

"The dispossessed are given prominence and visibility, albeit through a somewhat dystopian vision, which highlights that these communities often suffer from a lack of appropriate sanitation, electricity, medical services, and modern communications," he said.

Lagos’ main shanty town is situated in the Makoko district, a lagoon on the edge of the Atlantic Ocean. Parts of the district have been knocked down by the government to clear space for private sector developments.

"It's a conversation about how slums are frequently viewed as unsightly eyesores to be bull-dozed, leaving their inhabitants completely displaced," the designer said.

"This is a standard practice that occurs from Chicago to Rio de Janiero, and throughout the world."