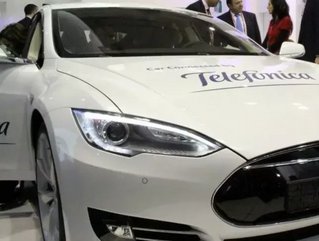 Telefónica has launched its second Connected Car Industry report exploring the attitudes of drivers towards car connectivity, with insight from industry experts.

The term Connected Car has been a buzzword within the automotive industry for several years, but the big question is - are consumers ready?

Research released today suggests they are with more than 70 percent of drivers surveyed saying that they are interested in using, or are already using, connected car services.

In fact, around half of consumers now consider connected features, such as inbuilt connectivity and the ability to plug in a smartphone, a key part of their next car purchase.

Features such as increased safety, early warning systems and smarter navigation are cited as the most popular, with almost three-quarters (73 percent) of drivers listing safety and diagnostics features as the most important.

The findings have been unveiled as part of Telefónica’s Connected Car Industry Report 2014 featuring independent primary research and contributions from six of the world’s largest car manufacturers.

Key trends identified by the report include:

2.80 percent of consumers expect the connected car of the future to provide the same connected experience they are used to at home, at work and on the move via their mobile phone.

3.Across all markets surveyed, there was clear consensus about the three features most in demand: increased safety, early warning systems and smarter navigation. Almost three-quarters (73 percent) of respondents chose safety and diagnostics features as the most important, giving a clear indication of the areas they would expect connected services to focus in the future. Usage-based insurance models are also very popular, with 54 percent of UK drivers choosing it one of the connected car features they would be most interested in.

4.On average 35 percent  of drivers expect not to own their own car by 2034, and instead predict they will be using alternative options such as car sharing services

5.The dashboard is the favoured way for accessing connected services, particularly for safety, navigation and vehicle diagnostics, with more than 60 percent of respondents across all markets preferring to access features in this way.

6.Drivers in different countries will prefer to pay for connected services in different ways. Most Spanish drivers would prefer a one-off payment (49 percent) while those in America, Germany and the UK would favour basic connectivity with the option to choose additional services. Brazilians are split between the latter and a full-on PAYG model, suggesting a degree of flexibility not seen in other countries.

Pavan Mathew, Global Head of Connected Car at Telefónica, commented: “Through looking at the connected car from a driver’s perspective, it’s clear that the demand for connected services in cars is unquestionable. Even though we’re just moving off of the starting line, people are ready for it and know what they want. But challenges to widespread roll-out remain.

“Many consumers currently think of connected car services in terms infotainment and WiFi, but this changes when they are made aware of the variety of options that the technology can offer.

“Safety and diagnostics appear to be the most attractive features to drivers, illustrating just how important factors such as road safety and vehicle maintenance are in consumer purchasing decisions.”

Telefónica is one of the largest telecommunications companies in the world in terms of market capitalisation and number of customers. The company has a significant presence in 24 countries and a customer base that amounts more than 313 million accesses around the world.

Read the report in English, Spanish and German here.