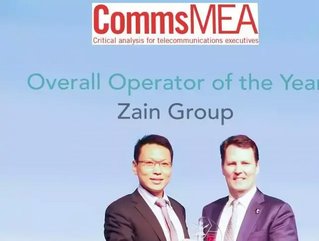 Zain Group has picked up the Best Overall Operator of the Year award at the 2016 edition of the CommsMEA Awards.

Zain Group’s operations in Iraq also won at the awards, with the best Marketing Campaign of the Year accolade for its ‘Hassa Eliya’ (Now for Me) campaign.

The CommsMEA awards judging panel acknowledged Zain Group’s six strategic initiatives aimed at making the company future-ready and capture the enormous potential of the regional and global digital arena as being particularly insightful.

These six areas are:

Zain Group is currently implementing data revenue optimisation initiatives and enhancing its customer experience, to positive effect. The operator’s efforts to place the customer at the heart of everything it does has successfully built brand and loyalty, which has led it to maintain market leadership by customer numbers in the majority of markets in which it operates.

Commenting on Zain Group’s awards, Scott Gegenheimer, Group CEO said: “We operate in a highly competitive industry, where the margin between success and failure is very thin, and being identified as the Best Overall Operator for 2016 is some accolade. We would like to thank the judging panel for also recognizing Zain Iraq’s marketing efforts, and let our customers know that we shall continue to innovate and work tirelessly to give them an exceptional mobile experience.”