10 rules for business growth in tough times from McKinsey 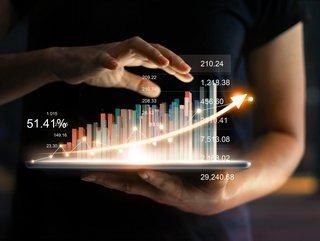 This strategy involves a bold aspiration and mindset, the right enablers in the organisation, and clear pathways to growth. McKinsey studied the growth and performance of 5,000 of the world’s biggest businesses over the past 15 years – since the 2008 financial crisis – to develop ten rules of growth.

Here are the 10 top rules for value-creating growth according to McKinsey.

A high return on invested capital (ROIC) indicates a business model powered by competitive advantage. Companies that generate stronger returns attract and deploy more capital, a virtuous cycle that enables them to grow faster and generate still higher returns. While some firms forgo profits for a time in pursuit of growth (with Amazon being perhaps the best known), the far more typical, and practical, approach is to establish a distinctive business model and then scale it.

Make the trend your friend

Over the past 15 years, companies that expanded in ways that maintained or increased their exposure to fast-growing, profitable segments generated one to two percentage points of additional TSR annually. This suggests that organisations already in attractive markets should keep investing to stay ahead of the pack. Firms facing market headwinds, on the other hand, may need to aggressively reallocate their resources toward tailwinds, potentially staging large-scale pivots.

Don’t be a laggard

Outgrowing your industry implies a strong business model – an advantage rewarded by capital markets whether you’re in a fast- or slow-growing industry. Furthermore, companies that manage to win market share away from competitors are likely to beat the growth expectations reflected in their share price, unlocking even stronger returns.

When developing a growth strategy, often the first question on a CEO’s mind is, “Where should that growth come from?” To help find the answer, McKinsey categorised revenue increases among its sample companies into growth within the core industry (their largest industry segments at the start of the study period), in secondary industries (smaller but still significant revenue contributors in the first year of our time frame), and in new industries (segments where the companies did not initially have a presence). This reinforced the importance of a healthy core business. Put simply, it is improbable that you can achieve strong growth if the core isn’t flourishing. 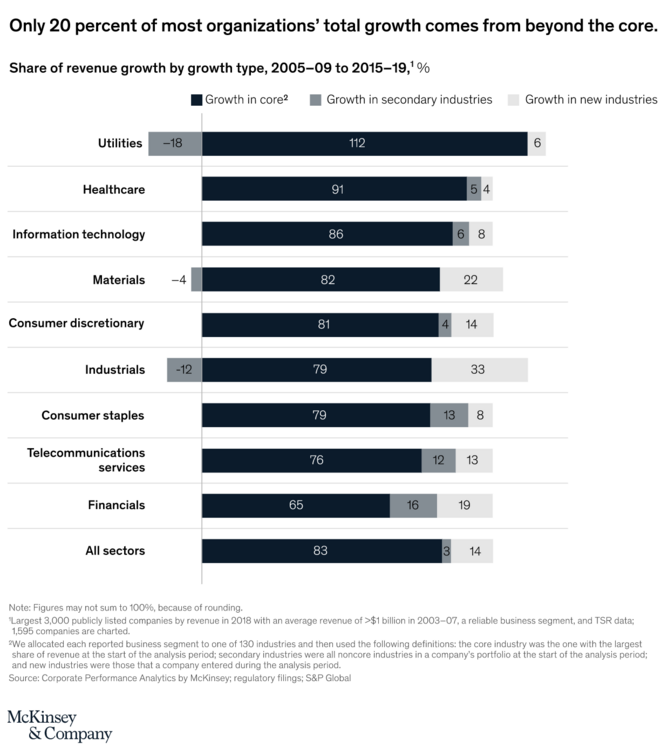 Look beyond the core

McKinsey’s study found that, on average, 80% of growth comes from a company’s core industry and the remaining 20% from secondary industries or expansion into new ones. However, these figures varied among sectors during the study period. For example, industrial companies generated a third of their growth from new industries, while utilities consolidated toward their core business areas more than other sectors.

For companies with fast-growing core businesses, expanding into new areas can help position their portfolios ahead of future trends. Those with slow-growing cores, on the other hand, can use adjacent businesses to offset slow growth elsewhere.

Grow where you know

Diversifying into adjacent segments can be a valuable growth strategy, but how similar should these segments be, both to the core and to each other? McKinsey used a simple measure: industries are similar if they often appear together in corporate portfolios (for example, cable and satellite together with broadcasting, or aerospace and defence with industrial machinery).

Be a local hero

Industry (along with moves up and down the value chain) is only one aspect of the “where to grow” issue. The other is geography. Just as it is hard to achieve overall growth if your core business isn’t thriving, it is unlikely that you can raise your growth trajectory without winning in your local market. In fact, fewer than one in five of the companies in McKinsey’s sample that had below-median growth rates in their local region managed to outgrow their peers.

Go global if you can beat local

Approximately half of the total growth by companies in McKinsey’s sample came from geographies outside their home regions – an aggregate number fueled by Japanese and European companies that relied on international markets to compensate for slow growth at home. In faster-growing areas, such as China and North America, international regions accounted for closer to 30% of total growth.

To succeed at international expansion, it’s critical to have a clear source of competitive advantage that is transferable across regions. Without it, foreign companies will probably struggle to compete with incumbents that better understand the local context.

Mergers and acquisitions account for approximately one-third of the revenue growth among companies in the data set. McKinsey’s research into M&A strategies has reaffirmed that it is not the total value of transactions but the deal pattern that drives shareholder returns. After segmenting companies into four categories, McKinsey found that programmatic acquirers – those that did at least two small or medium-sized deals a year along the same theme – outperformed peers using other M&A approaches. 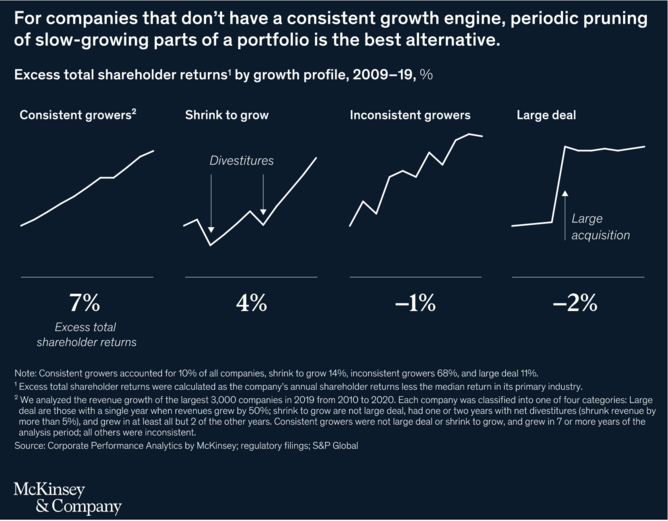 It’s OK to ‘shrink to grow’

Many management teams feel pressure to deliver consistent growth, which is understandable: the 10% of companies in McKinsey’s sample that grew for seven of the ten years between 2010 and the end of 2019 strongly outperformed their peers. But suppose you don’t have this consistent growth engine? Statistically, the worst thing you can do is try to buy growth with a “big bang” acquisition. Your best option is to periodically prune back by divesting slow-growing parts of your portfolio and reinvesting the proceeds into new areas.

All business leaders have cost benchmarks. Now you have a growth benchmark, too. However, mastering the ten rules of value-creating growth is only one part of a holistic growth recipe. Start by developing a clear growth ambition: a quantum of growth that is more than just the momentum of your current businesses. Then develop a coherent set of growth pathways that encompass as many of the rules as possible. Finally, instill the capabilities and operating model to execute with excellence.