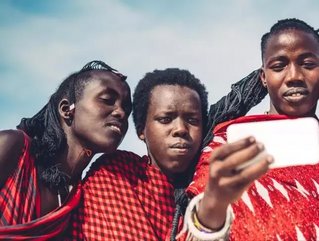 Since starting in 2006, TRANSSION – formerly known as TECNO TELECOM LIMITED – has seen its sales grow from 310,000 phones annually to around 80mn in 2016. The company was founded by George Zhu, who according to current Vice President Arif Chowdhury, was “a Chinese veteran, and one of the most experienced mobile entrepreneurs in China”. Prior to founding TRANSSION, Zhu had travelled to over 90 countries exploring opportunities. Chowdhury explains that TRANSSION was born from the idea that “there is a great need for good quality products in emerging markets, and if you can offer good products the consumer can benefit from, it will be good for the market as well as the company”.

Chowdhury himself has well over a decade of experience in the smartphone industry and an extensive knowledge of Africa’s smartphone market, an awareness of consumer needs which has proved central to the company’s success.

The decision to focus solely on Africa came not two years after the company’s foundation. But why ignore the world’s largest smartphone market, TRANSSION’s home of China, to focus on the African continent? “At the end of the last decade and in the early 2000s, there weren’t too many brands coming from China and doing business in the global market,” Chowdhury explains. “So we could make a real change in the industry by entering some key emerging markets and trying to understand and benefit the consumers - we wanted to open up a company that was more consumer-centric and to do a long term ‘good’.”

The decision to focus on Africa was based on its high population – at around 1.2bn, it has a market of similar size to China or India – and comparatively low mobile penetration. “If we look at 2006-7, the mobile phone penetration in China or the west was 60-70%,” Chowdhury explains, “but for Africa’s market the penetration rate was less than 30%.”

TRANSSION also had faith in smartphones taking off in the country, despite its different economy to China and the west. “We saw the industry in terms of China and the global technology movement, so we knew the market would really flourish, even in African countries, because mobile phones were a kind of revolution. In China and some other countries, it happened faster than Africa, but we knew it would happen,” says Chowdhury.

And it’s been a successful move by all accounts: “Since then TRANSSION has grown substantially over the past decade to become market leader, and we have been able to increase our headcount and at the same time our number of customers. We’ve seen lots of customers who own their first device thanks to our brand. That has been pretty amazing for us.”

Understanding what Africa wants from a smartphone

Chowdhury mentions several key areas smartphones must differ in Africa to be successful. These include dual-SIM enabling, battery life, camera quality and languages. He says that it was important first to “understand what the challenges were, what the ‘pain point’ was for the consumer”.

“In Africa they do count every penny due to their low income,” says Chowdhury, “so they are very cautious about their expenses.” As such, African consumers take advantage of cheap intra-network rates and promotions by having several SIM cards and using Orange SIMs to call Orange numbers, then switching to Vodafone to call Vodafone numbers, and so forth. Chowdhury explains how this resulted in dual-SIM enabled phones to make it easier for users to save money: “Most people had four or five SIMs they’d keep in their wallet. We found that if we brought in dual-SIM phones, they would be able to put both in their phone and just choose which number to call with.”

Another key way TRANSSION has shown its understanding of African needs is through the pixel technology developed for its smartphone cameras. Chowdhury says: “For African consumers, a main medium of entertainment is photos – they love to take selfies and share them with friends. The traditional camera was not optimised for the African consumer because often, for those with darker skin, the photos don’t come out well especially in low light. We did research using over 10,000 photos of African consumers to create a special algorithm to optimise the camera to attract 30% more light on the darker face. We call this ‘Africa Focus’. It’s been heavily popular. It improved our cameras and won the hearts of Africans who like to take selfies.

Languages were also added to show the consumer TRANSSION was serious. “We developed local language. In Ethiopia, we launched our phones with Amharic, Tigrinya and Oromo in the East African market and in countries such as Kenya and Tanzania we launched devices with Swahili, and in Nigeria with Hausa. This brought to the consumer’s mind: ‘OK, this company is very serious and wants to stay in the market’.”

It’s also launched various platforms to cater for consumers’ needs. “Palmchat and PalmPlay are another message to the consumer about how we care for them. Some other messaging tools are more popular in the smartphone segment but what about the millions of users in Africa who still have feature phones and want to chat with their friends and make new ones?” Palmchat now has over 170mn subscribers.

“We have also developed an app called Boomplay which, in terms of licensed songs, is the largest of its kind in the world. We’ve signed agreements with renowned artists from different countries in sub-Saharan Africa and Google now ranks it as the most famous music app for the continent. It’s been downloaded over 5mn times.”

Pricing for the African market

In addition to understanding tariff costs, TRANSSION takes a multi-brand approach to ensure a range of pricing. Chowdhury explains that TECNO, itel and Infinix are “different brands to cater for the different needs and demands of the different segments”.

“We never claim we’re the cheapest brand,” he clarifies, “because we believe in providing value. Most importantly, African consumers are price conscious and therefore we need to give them more value.” He uses the example of selling a $10 phone which might only last six months, versus a $15 phone which will have a long-lasting battery and will include quality after-sales service, so the cost per use will be much lower.

“We try to really engage with that particular segment. So in terms of pricing, while we have different brands with different kinds of pricing, quality and affordability have always been the key concerns, while providing value to the consumer.”

Chowdhury explains the three brands of TRANSSION: “itel is mass-orientated with a wider focus – it tries to provide products for people who want something affordable but good quality. TECNO is a bit more premium, and focusses on some specialised technologies like music and low-light selfies. Infinix is our online brand which includes offline access – more young people now are really tech-savvy and have the desire to try the newest, highest spec, but again affordability is an issue. They want to try a phone with a 20 megapixel camera, but must be able to afford it.”

TRANSSION has further proved itself as a permanent fixture in Africa by opening a factory in Ethiopia. “This is actually a way to show the firm is confident in the market and we have a true desire to demonstrate a full commitment to Africa. In addition, having a factory in Ethiopia has allowed us to increase our distribution capabilities and to significantly improve lead times.”

Is there potential in Africa for more multinationals? “Why not?” says Chowdhury. “If they are serious. Having a factory will show this, as will investing in after-sales service because this is also something that costs money - if you’re offering a good warranty and after-sales support for your consumers, then it does mean you’re giving a commitment to the society.” TRANSSION provides this through Carlcare: “It’s one of our subsidiaries and provides after-sales services across all of our brands. This is something we found was missing in African business.”

In relation to challenges of setting up in the African continent, Chowdhury concedes: “China was previously our manufacturing hub, so an initial challenge was quality control and supply chain management. Initially we brought Chinese teams over to Ethiopia to train the local people. Human resources was a challenge, but we offered that initial support and now the facility is run almost entirely by locals.”

For TRANSSION, a key slogan is ‘think globally, act locally’. “This means using global technology to solve local needs and demands,” Chowdhury explains. “In the African market, we’ve done lots of things as a first, such as solving the dual-SIM problem, and we have to continue to listen to the market, staying ‘on the ground’ and not managing Africa from China. Africa has to be managed from Africa.”