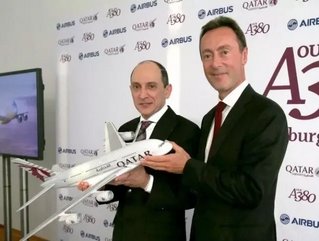 Leading Middle East carrier Qatar Airways held a large press briefing with Airbus at the plane maker’s factory in Hamburg, Germany, as the airline took delivery of its highly anticipated first A380.

With 10 Airbus A380-800s on order, Qatar Airways is preparing to take delivery of four of them before the end of this year.

Speaking at the press conference at the Airbus base Qatar Airways Chief Executive, His Excellency Mr. Akbar Al Baker said: “This has been a moment more than a decade in the making and we are so delighted to unveil a new passenger experience for our travellers.

“The A380 that we are introducing is not just any A380; we have completely designed every element, giving it a signature touch that has never been seen before on board.

“Additionally, the newly opened Hamad International Airport, the airline’s hub in Doha, has been specifically created with the A380 in mind, with five contact gates dedicated only for this aircraft, making the experience smooth and effortless for passengers.

The press event in Hamburg featured a lively round of questions for Mr. Al Baker as the highly anticipated super-jumbo makes its debut, joining the Qatar Airways fleet.

The airline will first introduce A380 services on one of its frequencies on the Doha – London route from October, followed by Paris Charles De Gaulle shortly thereafter.

Fabrice Brégier, Airbus President and CEO, said: “We are very pleased to welcome Qatar Airways as the latest airline to offer unprecedented A380 services to the world. The multi-award-winning carrier and our flagship product are a perfect match to excite the flying public in all markets.

“Leading carrier Qatar Airways aims for the best, and we are proud our A380 is an essential ingredient in their strategy to show-off their excellence and hospitality, connecting the world.”

The 517-seat aircraft is spread across twin decks in a tri-class configuration of eight seats in First Class; 48 seats in Business Class and 461 in Economy Class.

Economy Class passengers benefit from the most spacious A380 arrangement flying in the skies, with a pitch of 32 inches spread in a 10-seats-across layout.

The premium cabin is fitted with multiple bespoke elements such as luxe finishings and tailor-made fabrics designed exclusively for the airline.

In-flight entertainment on board is state-of-the-art using the Thales mainframe Top Series Avant system with features such as an Android open platform with intuitive swipe functions and customised HD monitor of up to 26” in First Class.

The airline currently operates a mixed fleet of the Airbus family of aircraft, a large contingent being the single-aisle A320s and also a mixed range of A330s and A340s.

In the last quarter of 2014, it is expected that the airline will start receiving its first A350 XWB aircraft as the world’s launch customer.