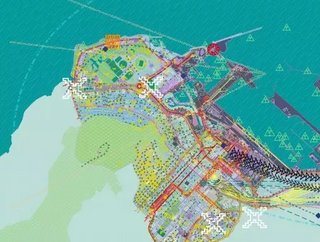 Ahead of global leaders attending Cape Town to explore economic opportunities at the World Economic Forum (WEF) conference, Siemens has unveiled its data visualisation of the city.

The visual – made of bright fabric, inspired by Bo Kaap – illustrating the importance of data for the transformation of urban Africa into smart cities, outlining the key infrastructure points in the city and its underlying data.

“These data patterns speak about unlocking the potential of African cities through digital ingenuity. Data on each infrastructure point gives greater insight on the challenges being faced in the city, and helps leaders make smart urban planning decisions in future,” says Siemens Head of Corporate Communications for Southern and Eastern Africa, Keshin Govender.

Keshin Govender goes on to say: “Siemens has a long history with the City of Cape Town and has assisted in developing and maintaining many landmark projects. Throughout the years, we understood the challenges it faced and in future we are open to continuing these kinds of partnerships to help create a more connected, efficient and powered city.”

Siemens history with Cape Town dates back to the 1860’s when it developed the first telegraph line between Cape Town and Simonstown.

Other projects by Siemens in Africa include: