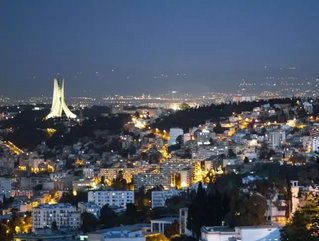 As Algeria hopes to move away from dependence on the oil and gas market, Algiers’ improving tourism sector is set to grow further.

Situated on the Mediterranean coast of North Africa, Algiers is the capital of both Algiers Province and Algeria. With a metropolitan population of 3.68mn and a national GDP of $159bn, according to Forbes, Algiers is the fifth largest city in North Africa. The World Bank classifies Algeria as an “upper-middle income nation,” with a GDP growth of 3.3% since 2016.

Algeria’s largest industry is the oil and gas sector, with the country boasting the third-largest natural gas reserves in the region, and ranking 18th on a list of global oil producers in 2016. The International Monetary Fund says Algeria's oil and gas revenue accounts for more than 95% of the country's export earnings and 60% of its budget. However, the country’s oil production fell dramatically in 2017, from 1.1mn barrels per day in January 2017 to 997,000 barrels per day in October, according to a Trading Economics study. With oil and gas exports, which represent 35% of the country’s GDP, in decline, business interests in Algiers, both private and state owned, have taken steps to bolster the national economy through increased investment in the tourism industry.

The Oxford Business Group Algeria Report, published in 2017, claims: “Algeria is primed to make use of its significant tourism potential. Though the industry remains underdeveloped, particularly in regards to the number of hotel rooms and the cumbersome visa regime, foreign business tourism and niche areas such as spa, desert and ecotourism have strong scope for growth.”

In order to combat the country’s lack of tourism infrastructure, the minister for tourism, Hacène Mermouri, announced the government’s plan to increase annual visitor figures from the current average of 2.7mn to 4.4mn by 2027, and in order to support this the Algerian government has announced the approval of 1,812 new hotel projects, as part of an initiative to more than double the country’s guest room capacity.

Of these projects, 582 rooms are already under construction, according to a report by Katherine Doggrell for Hotel Management. 197 of these hotels, with a total capacity of 39,000 beds, are under construction in Algiers itself, according to a statement made by Mermouri in September last year. The project, he claims, will create 18,000 construction jobs in the city, in addition to those created by the $1.86bn government investment in renovating existing hotels throughout the city.

In January 2017, Marriott International announced plans to open a further six hotels in Algeria, more than doubling its footprint in the country. The international hotel brand currently has no presence in Algiers, and has yet to announce the location of its new hotels. Marriott International’s President & Managing Director, Alex Kyriakidis, described the country as “integral to our overall development strategy throughout Africa”.

In March 2017, an affiliate of Hyatt Hotels Corporation announced plans to open a new location at the Houari Boumediene Airport in Algiers. The Hyatt Regency Algiers Airport is expected to open in 2018, and will be the first Hyatt-branded hotel in the country. The 326-room hotel will be the only terminal-linked hotel at the Houari Boumediene Airport. The hotel will also offer more than 4,950 sq ft of lounge space, seating areas, and meeting and events spaces.

Hamid Melzi, Président Directeur Général of Algeria’s Société d'Investissement Hôtelière said: “We are delighted to be working on our first project with Hyatt and to introduce the Hyatt Regency brand to Algeria. With the hotel’s prominent location... we believe the globally recognized Hyatt Regency brand will resonate with the growing base of business and leisure travelers visiting the city.”

The new investment in hotel capacity has also prompted the government to promote vocational training, according to Lazhar Bounafaâ, CEO of the Group Hôtellerie Tourisme et Thermalisme, who claims the development of qualified human capital is crucial for the future advancement in the sector. "The sector needs to develop public-private partnerships in training and education to generate a workforce that hotel projects can benefit from and that can improve the productivity and performance of the sector."

The emphasis on job creation in the construction and tourism sectors has contributed to Algeria’s recent labour shortages, Reuters reports. “Youth unemployment is running at around 30% in Algeria, but the country also faces a shortfall of workers in some sectors as it tries to steer its economy away from over-reliance on oil and gas production.” The government announced in 2017 that it plans to institute a programme that will grant residency and work permits to illegal African migrants, mostly from Niger and Mali. The programme, which will aim to replenish the country’s ‘legitimate’ labour pool, is also part of an attempt to reduce race-based violence it claims is acting “to tarnish the image of our country”.

This global image is possibly the largest obstacle facing the growth of the tourism trade in Algeria, with Algiers designated a high-risk area for tourists at night by gov.uk. However, the country’s 20-year old terrorism policy has recently seen it gain significant ground in the battle against terrorist group Al Qaeda.

With the decline of terrorist influence in the region, growth in both the construction and hospitality industries, and the backing of the Algerian government, 2018 is expected to be a time of continued growth in Algiers’ tourist trade, as the number of visitors from France – the second largest tourist source market to Algeria – has risen steadily in recent years, from 121,000 in 2014 to 169,000 last year, and further growth from new markets is expected to be instrumental in reducing the country’s dependency on oil and gas.