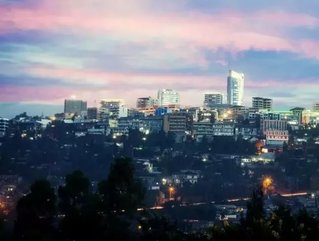 Known for its clean streets and progressive technology startups, the capital city of Rwanda offers visitors a vibrant, creative, and cultural view of East Africa. Following on from its turbulent history, communities now meet for the monthly Umuganda – in which the population, including the president, clean the streets.

With tourists often visiting the nation to immerse themselves in the nature of what is known as the land of a thousand hills, Kigali can attract visitors away from safaris and into the city with its booming restaurant scene. The land-locked country relies on its Lake Kivu to offer fresh fish, whilst Rwanda’s hills and volcanic soil provide the perfect conditions for growing coffee. The city’s art culture is known to attract tourism, with sites ranging from a former presidential house turned museum to the Niyo Art Gallery – which shares its profits with the Niyo Cultural Centre to fund the education of street children. The centre, located in the north of the city, teaches traditional Rwandan dancing, drumming, and singing.

The Rwandan government is focusing its financing within the technology industry as it aims to develop a knowledge-based and middle-income economy. In 2016, Innovation City was launched to meet this goal. The strategy has led to the government establishing a RWF87.5bn (US$100mn) venture fund with a goal attached – to create more than 100 technology companies that are worth RWF43.7bn ($50mn) by 2030. The Rwanda Development Board (RDB) was introduced as an administrative department to target investment and innovation hub development in the nation, and has since enabled companies to launch technology hubs in the capital city. The RDB cites “sustained economic growth”, “robust governance”, “investor friendly climate”, “access to markets” and “excellent labour markets” as reasons to invest in its operations.

“In Kigali, we have found a location that makes travel to-and-from other African countries seamless and also has the modern and connected infrastructure we require to collaborate with a global workforce,” stated Jeremy Johnson, the Co-Founder and Chief Executive Officer of Andela, a software engineers-focused firm that established a hub in the city through RDB earlier this year.

In 2016, the government initiative Innovation City saw the city covered in an infrastructure of fibre optic cables that has enabled 95% of Kigali to be connected to 4G LTE. In November 2018, the initiative received RWF350bn ($400mn) in funding from Africa50, the pan-African infrastructure investment company.

Kigali has seen a rise in its role as a host, with events such as the Audiovisual Forum and Rwanda BUILDEXPO taking place in the Kigali Convention Center. The building, established approximately three miles east from the central business district on Nyarugenge Hill, was developed by the Ultimate Concept Limited consortium. Prime Holdings Limited, the Social Security Fund of Rwanda, and the Rwanda Investment Group invested a total of RWF262.5bn ($300mn) into the project. Construction began on the iconic building in 2009 and was completed seven years later in 2016. The shape and light features on the structure symbolise the innovative and technologically-advanced future of the city, which was substantiated when the centre won the award for Best Architectural Design at the Africa Property Investment Summit this year.

A masterplan, dubbed Kigali 2040, has been set for the city. The strategy features environmental and nature preservation plans, infrastructure development, and technology advancements. By the deadline, Kigali’s population of 1.2mn people is forecast to triple. The government will be required to find the space to increase residential capacity across the natural landscape without destroying it, calling for high-rise buildings.

In keeping with the city’s sustainable future, the Rwanda Environment Management Authority (REMA) has revealed plans to transform the Nyandungu wetland into an urban recreation and eco-tourism park. The RWF2.4bn ($27mn) project will be under construction for five years. Upon completion, the park will enable biodiversity conservation across native trees and aquatic habitats, as well as creating new jobs in the city. “The project is part of a plan to improve clean air, protect environment but also provide green environment for citizens to spend their time off in sports and enjoying the environment,” stated Dr Vincent Biruta, Rwanda’s Minister of Natural Resources.

The masterplan aims to separate Kigali into three districts: Nyarugenge, Kicukiro, and Gasabo. Nyarugenge will form the city’s financial hub, with Kicukiro becoming the knowledge hub, and Gasabo to focus on employment and culture. “We have got different sections where we have the financial hub and the central part of the city, Gasabo district is considered as an employment hub, where we are looking forward to seeing different categories of industries, while in Kicukiro we will have universities and recreational parks,” stated Lilian Mupende, Director of Urbanisation at Kigali City Council, when the plans were released.

The forward-thinking city is demonstrating clear signs of progression, focusing its financing on sustainability, technology, and infrastructure with the aims of attracting more tourism to the cultural heart of Rwanda.