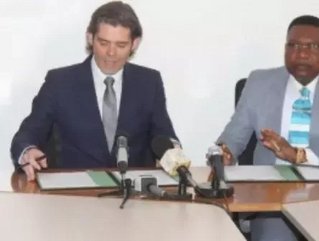 In 18 months’ time, Euronews will have a sister channel in Africa.

In partnership with the national television channel of the Republic of the Congo, Euronews will bring to Africa its unique know-how as a multi-lingual and multi-cultural news channel, broadcasting around the clock.

Starting with English and French, and then adding other languages widely-spoken on the continent, Africanews aims to become the first Pan-African rolling news channel.

The headquarters will be in Brazzaville and regional offices will be set up across the continent. Africanews will adhere to the same editorial charter as Euronews, guaranteeing its independence.

The two networks will share their news, creating a synergy that will give Africa its rightful place in the world of news and give the world the latest news from the continent.

Michael Peters, Chief Executive Officer of Euronews S.A., and Jean Obambi, Managing Director of Télé Congo, signed in Congo Brazzaville a cooperation agreement for the launch of a Pan-African news channel to be known as Africanews.

Under the auspices of the President of the Republic of the Congo, Denis Sassou Nguesso, they formalised the partnership that will lead to the launch in the summer of 2015 of a bilingual news channel in French and English, to be followed by other major languages of the continent (Portuguese, Arabic, Swahili, etc.).

The headquarters will be in Brazzaville and regional offices will be set up across the continent.

Euronews, the top news channel in Europe, has developed a unique know-how in broadcasting. The channel produces 13 different language versions, 24/7.

Its programmes are created by a newsroom of more than 400 journalists of 30 nationalities, and reach 400 million households in 155 countries.