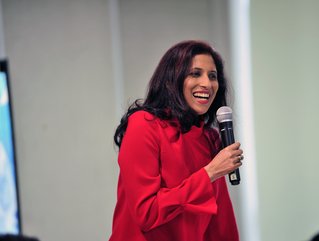 The first female, first Asian and youngest-ever CHRO of Unilever, Leena Nair takes her passion for people to Chanel, leading the fashion house into 2022

Leena Nair is a woman of many firsts. As well as being the first female, first Asian and youngest ever CHRO of Unilever, she has been the first female in nearly all roles she held at the consumer goods giant over the last three decades – including the first female manager to opt for a factory stint and the first woman in Unilever’s Management Committee in 90 years.

But the Indian-born British national is not done yet. After three decades with Unilever, five as CHRO, Leena Nair has been tapped by Chanel for the French luxury group’s top job, making her the first luxury brand CEO of Indian origin and the first from an HR background.

“Nair has built a global reputation for progressive and human-centred leadership, delivering significant business impact,” Chanel said in its statement announcing her hire.

It’s certainly true that Leena has been critical in the building of Unilever into a purpose-led, future-fit organisation, one that has become the employer of choice in more than 50 countries worldwide.

As Unilever CEO Alan Jope puts it: “Leena has been a pioneer throughout her career at Unilever, but no more so than in her role as CHRO, where she has been a driving force on our equity, diversity and inclusion agenda, on the transformation of our leadership development, and on our preparedness for the future of work.”

You would think that having overall responsibility as CHRO for the company’s 150,000-strong human capital across 190 countries would have been achievement enough, but Leena’s strong leadership, HR expertise, and passion for people was instrumental in helping to drive the continued growth of both Unilever’s profits (US$50.7bn) and its purpose.

Unilever is one of the world’s most socially conscious companies, scoring a best-in-class rating on S&P Global Rating’s ESG Evaluation in 2019, and crowned industry leader in personal products with continued scores of 90+ in the Dow Jones Sustainability Index since 2016.

It is also one of the world’s most diverse and inclusive, and it has been Leena’s leadership on this in particular that has created such an industry-leading culture.

Under her tenure as CHRO, Unilever achieved a 50/50 gender balance across global leadership with Leena leading a pioneering agenda with bold new social commitments, including recent pledges to pay the living wage across its entire supply chain by 2030, and equip 10 million young people with essential skills by 2030.

She created numerous projects, many of which were pioneering the future of global work. She spearheaded the Unilever ‘discover your purpose’ workshops, catering to 6,000 employees to date; pioneered the four-day week pilot programme currently being explored in New Zealand; instigated the U-Work program, which joins the flexibility of contract work with the security and benefits of an in-house role; and initiated U-Renew, a paid learning sabbatical programme to help workers upskill, currently under test.

Throughout her three-decade-long career at Unilever, Leena innovated in the delivery of culture-rich programmes, having previously initiated as Unilever’s VP of HR for South Asia the Career by Choice programme, to help women who’d fallen off the career ladder re-join the workforce.

Leena Nair – how did she get there?

It was almost exactly 30 years ago, in February 1992, when Leena arrived at the doors of Unilever. After securing an MBA from India’s oldest business school (XLRI), she secured a graduate management trainee role at Unilever in Hindustan, where she worked her way up from the factory floor.

Cutting her teeth on a handful of managerial roles in employee relations and in HR, Leena landed her first leadership role in 2006 as general manager of HPC and Foods and Head of Management Development, where she led the move of the company’s Foods business from Bangalore to Mumbai and created a model for building capability that is now used company-wide.

Within 10 months, she was promoted, becoming the first woman on the Unilever South Asia leadership team. Responsible for the firm’s growth in five markets with a business size of US$6.75bn, it was here that Leena embedded performance culture as a way of life for Unilever, improving productivity levels by 33% within two years and transforming employee relations into a proactive employee-centric function.

Fast-forward six years, Leena is promoted to Global SVP Leadership and Organisation Development and Global Head of Diversity and Inclusion, where she was instrumental in driving the company’s employer brand to a record high and advancing the diversity agenda to industry leadership. She also spearheaded the creation of a world-class leadership centre in Singapore and was the lead on key technology innovations simplifying the firm’s core HR offerings.

It was in 2016 when Leena finally landed the top HR job. Relocating to London in 2016, she took the global HR reins as CHRO of Unilever and ran with it.

And why wouldn’t she? For someone whose purpose is to “ignite the human spark for a better business and better world”, Leena was certainly living her dream job. And she was recognised for it with HRH Queen Elizabeth II acknowledging Leena as one of the most accomplished Indian business leaders in the UK.

Now, in 2022, as human-centred leadership becomes more central to business success than it has ever been, Leena is taking her purpose and passion for people to the business of fashion, where she will run the show globally for Chanel, which generated sales of US$10.1bn in 2020, and employs more than 27,000 people internationally.

“I am so inspired by what Chanel stands for,” says Leena. “It is a company that believes in the freedom of creation, in cultivating human potential and in acting to have a positive impact in the world.”