By Genevieve Belmaker
May 18, 2020
undefined mins 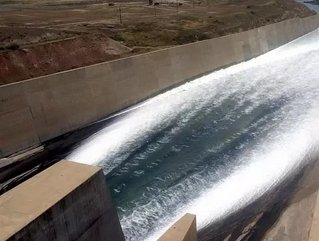 It has been dubbed the ‘most dangerous dam in the world’, and now the race is on to repair Iraq’s behemoth Mosul Dam before spring floodwaters overwhelm the structure and cause its collapse.

Built in 1986, Mosul Dam is a key water resource management tool for Iraq and an important strategic tool. Situated on the mighty Tigris River, it is downstream from the mountains of Turkey. The dam is also just north of the city of Mosul, an Islamic State (IS) stronghold, which complicates security and maintenance. In fact, in 2014, Islamic State briefly captured and held the structure.

Though control of Mosul Dam was regained, the skilled workers who painstakingly maintained the structure’s troublesome integrity by injecting cement slurry 24-hours a day, 7 days a week had already scattered. The loss of those difficult-to-replace workers, along with the deterioration of the dam while IS held it, and the impending spring floodwaters of the Tigris River have combined to create a potential humanitarian and water resource crisis. Perhaps most critically, a water release valve that has been broken since 2013 could make it impossible to release the rising reservoir level quickly enough.

In short, Mosul Dam could be on the verge of collapse and the race is on to make the necessary repairs before it is too late. It is estimated that at least 500,000 people would die if the dam collapsed.

Enter the Italians. A contingent of engineers and experts under the purview of the Trevi Spa, a division of Italy’s Trevi Group, has already begun what will amount to about 8 months of repairs. The expedited contract, signed on the 2nd of March, is worth 273 million Euros.

“Specifically for this important project an intense level of drilling activities and injection of cement mixtures will take place for the consolidation of the foundations of the dam,” said the company’s top management in a statement.

In April, Trevi commenced setting up more than 450 Trevi technicians and staff in temporary housing to work at the site. The area is too dangerous for workers to live off site and travel to the dam. About the same amount of Italian military troops will also stay in the area to protect the workers from regional threats.

Trevi workers will repair and maintain the dam’s bottom outlet tunnels. They will also give specialised courses and training for technicians and local staff on the Trevi Group’s Soilmec drilling rigs. The rigs are key for repairing ongoing leakage that occurs because Mosul Dam is built on a gypsum karst foundation, which is extremely soluble and requires continuous maintenance. The foundation is drilled and the cement slurry is injected for stability. It is precisely that ongoing work that was neglected when IS held the dam for several weeks in 2014.

“The award of the contract, due to the procedure of urgency related to the conditions of the dam, will not follow the normal tendering procedures and rules of the ministry,” noted the Iraqi government in a statement in February announcing the contract.

It’s not the company’s first urgent repair job. The Trevi Group has almost 6 decades of experience in soil engineering and has done dam specialized maintenance work more than 170 times around the world.

The US Army Corps of Engineers has been intimately involved, as well. A semi-confidential report issued earlier this year that was partially leaked through the Iraqi Parliament, gave the findings of a very bleak Corps assessment of the dam’s condition. The findings of that report were largely responsible for sounding the alarm on urgent maintenance needs. U.S. interests in the area--military, business, and political--have also been given an evacuation and contingency plan by the U.S. Embassy in the event that the dam fails catastrophically.

Rebecca Keller, a science and technology analyst for the US-based global intelligence company Stratfor, noted that some of the repair work will be a challenge.

“It’s going to be a little bit harder in a region that’s still in flux,” said Keller. She added that fears of total collapse might not be as imminent as they seem.

“Most of what’s going through the news right now is a worst case scenario,” she said. “It is still a possibility which everyone is trying to prevent.”

In the long run, Keller said that effective regional water resource management could prove to be the most daunting challenge. There is a significant scarcity of resources and a continued migration away from agricultural areas because of a lack of water.

“In places of conflict you don’t necessarily think about that as the resource you can lose.”

Iraq is in a particularly weak position on that front, and needs to communicate with its neighbors upstream: Syria, Turkey, and Iran. Regional instability makes that a problem. Turkey’s current construction project of the controversial Ilisu Dam, also on the Tigris River, could also complicate matters. The project will flood the 10,000 year-old city of Hasankeyf and displace about 70,000 people, according to analysts. It could also have unforeseen repercussions for neighboring countries.

“There aren’t many countries that communicate well about water issues, even in the US,” said Keller. “In general people think that water is a right. They don’t think of it as a resource. You want what’s best for your town or state or nation. It’s a global problem.”

A core group of prestigious academics, who believe that Mosul Dam is under the imminent and inevitable threat of collapse, are also working to find solutions. In April, Peace Ambassadors for Iraq hosted a panel of international experts for a symposium on the topic. Aside from urging repairs, their focus has largely been on emergency evacuation procedures.

Ubertini and others at the symposium recommended that local insight be tapped as a resource to create what would be “a highly complex engineering project” to map out buildings and surrounding infrastructure needed to save as many lives as possible if the dam does go.