Sprinting away from adversity 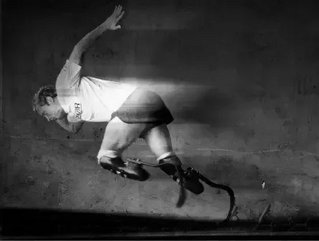 Oscar Pistorius has made waves, not just across Africa, but globally since he burst on to the athletic scene in the 2004 Paralympics in Athens.

Since then he has dominated his trademark events at 100, 200 and 400 metres, and has become so successful in the latter that he has competed in the able bodied event at the athletics World Championships too.

Aged just 11 months, a congenital absence of the fibula in both legs led to a double amputation of the lower limbs, but like the problem facing so many of his fierce international competitors, this was, in no way, ever going to slow Pistorius down.

With eyes focused on the Olympics and Paralympics in London later this year his sporting credentials are second to none, as depicted by the numerous global awards he has received as a consequence. But the South African is far more than a one trick pony, and the 25-year-old is already laying down the foundations for a second career in business.

Pistorius is currently studying for a Bachelor of Commerce in Business Management with Sports Science at the University of Pretoria, combining his two major passions.

‘Bladerunner’ as he is affectionately known, due to the design of his prosthetic legs, has already shown his business capabilities, and his promotional pulling power, through his affiliation with French fashion designer, Thierry Mugler.

The advertising images used crossed the boundaries between machine and man in a clever initiative from both parties.

Ever since the partnership was formed, the two have co-existed in complete harmony, aiding each other’s respective industries. A win for one reflects well on the other, and Pistorius has definitely got used to winning over the years.

Out of the limelight, off the track and away from the cameras, ‘the fastest man on no legs’ is also respected as a kind and respectable individual, and this has been brought to life with his recent charity work, also.

As an ambassador for the Mineseeker Foundation, Pistorius’s endearing love for his homeland, and the wider African continent in general is clear for all to see.

The non-profit organisation is allied with the British Military of Defence in raising awareness as well as scoping the undetonated mines across dangerous African regions, and Pistorius’s notoriety has played a large part in developing the initiative.

It is this same notoriety that will keep the name ‘Bladerunner’ in people’s memories long after his sporting career has ended. In fact, his second career has already begun, and you would not bet against him being just as successful a businessman as he has been an athlete.