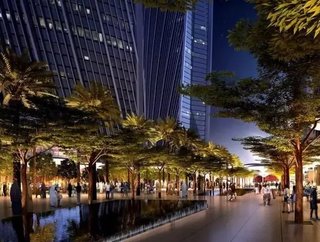 Smart cities are starting to become a commonplace feature within the developed world, as construction and technology companies increasingly join forces to create the most advanced yet user-friendly living situations for citizens. The ‘smart city’ concept is defined as being an urban living space connected by integrated IT (or the Internet of Things), not just within peoples’ homes, but in all available services required in day-to-day life, ensuring a fully digitally-supported lifestyle.

The Middle East has been a trailblazer of smart city innovation, with an especially successful cluster of such companies existing in Israel, particularly Tel Aviv. One of the most recent such developments of this kind is at Lusail City in Qatar, which aims to provide a high-tech environment for residents. Lusail is the newest planned city in Qatar, just 23 kilometres from the centre of Doha, on the coast in the north of the municipality of Al Daayen. It is 38 square kilometres in size and covers four exclusive man-made islands and 19 districts including residential, entertainment, and commercial. It is expected that 450,000 people will live there, and there will be around 22 hotels for visitors, ensuring that Lusail City and Qatar itself will become a hub of investment and international interest.

The planned districts include:

Developers plan to use a common fibre optic network infrastructure to integrate all systems and services, and they will be controlled via the Lusail Command & Control Centre (LCCC). This is placed at the heart of the city, and is the hub at which all smart services will be monitored. It is composed of an Operation Centre and a Data Centre, each including a team of dedicated operators keeping the LCCC working at optimal levels.

The LCCC provides three levels of service to residents, the ‘base’ level including mobility, security, municipality administration, telecoms, and traffic management. Value-added services will enrich the experience of the smart city resident and include: emergency, entertainment, marina operations, light control, energy management, utility monitoring, billing, smart card, private parking management, non-traditional communication, and other aspects which can be included to make life ever more easily managed.

The Lusail City project includes a strict public transport strategy, which is expected to cut road traffic incidents enormously, and ensure a swift and organised service. There will be a pedestrian network for walkers, bicycle ways for cyclists, and the promotion of buses, trains, and water taxis to be integrated in what has been named the Future Highway Network Development. A top-of-the-range underground train network is being developed, and emphasis is placed on the conservation of energy.

Sustainability, not always a priority in this region, is an important element of Lusail City. Utilities are a particular focus, and the project boasts district cooling, pneumatic waste collection, and an innovative gas network. City operations and maintenance costs will be lowered due to the integration of all necessary daily services. Lusail City also falls in line with Qatar’s ongoing 2030 national vision and the Kyoto Protocol, which was signed by the nation in 2012 and outlines a strategy to reduce the world’s carbon footprint.

Lusail’s eHome service for within private buildings is perhaps the smartest element of the city. The available functions are diverse and innovative, and include:

The pinnacle of Lusail City will be its Iconic Stadium, which is set to host the opening and final matches of the 2022 FIFA World Cup. It will have a capacity of at least 80,000 people, and the design is inspired by the sail of a traditional dhow (a lateen-rigged ship). Post-World Cup, and once it has accumulated well-deserved fame, Iconic Stadium will be used to host other sporting events.

Lusail City should be completed by 2019, and will undoubtedly be a cultural and technological jewel in the Middle East’s crown.