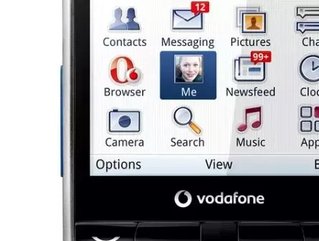 Facebook has partnered with Vodafone to release a low-cost smartphone targeted at younger customers and emerging markets.

The Vodafone 555 Blue will feature a full QWERTY keyboard and Facebook messages and SMS messages will appear in the same inbox. An ‘F’ button will encourage users to post links and images on their Facebook page.

Vodaphone hopes the device, which will retail at $100, will have mass-market appeal. They are expecting particular success in emerging markets where Facebook and mobile data usage is growing rapidly, such as South Africa, India and Turkey. They expect to sell millions of the device—“anything below millions will be disappointing,” said Patrick Chomet, Vodafone’s group terminals director.

“This is part of a movement that we want to accelerate of empowering the mass market on data,” he said. “It doesn’t do everything ... but it will be better than your Facebook experience on your smartphone because it’s not an app, it’s the whole <span class="scayt-misspell" data-scayt_word="phone." "="" data-scaytid="1">phone.”

Facebook has given itself a target to reach one billion users. It currently has 750 users. If successful, Vodafone 555 Blue will enable the social networking site to gain users in these emerging countries, where fixed-line internet connections are scarce.