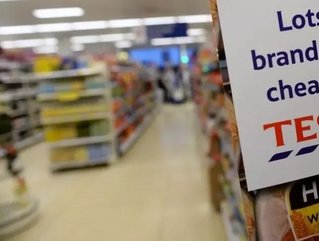 Europe’s largest retailer Tesco has reported its preliminary results for the year ending February 28. The figure that grabbed attention, a statutory pre-tax loss of nearly £6.4 billion, is the worst in the company’s history and compares with a pre-tax profit of £2.26 billion in the previous year

CEO Dave Lewis, who has led the company since his appointment in September 2014, however, has chosen to continue his cautious approach to forecasting and warned that market conditions will not get much better in the coming year. Reaction from the City reflected confidence in his commitment to rebuild the company and Tesco shares rose on the London Stock Exchange by more than one percent in early trading  to 237.8p.

Crawford Spence, Professor of Accounting at Warwick University commented: "These figures are absolutely huge - nearly the biggest loss in UK corporate history. However, they need to be understood in context. They relate mostly to asset write-downs rather than poor trading performance. Underlying trading performance for Tesco has actually not been too bad in recent months. In many ways Tesco has decided to make these losses now rather than later. It all needs to be understood within the new CEO’s strategy of 'taking a bath' in his first couple of years in the job - basically, if he gets all the skeletons out of the closet early on then Tesco will look bad initially, but he will give himself a set of benchmarks that are relatively easy to surpass in the coming years."

Mr Lewis, without referring to the investigation by the Serious Fraud Office (SFO) into last August’s overstated half-year profits forecast, admitted that this has been a very difficult year for Tesco: “The results we have published today reflect a deterioration in the market and, more significantly, an erosion of our competitiveness over recent years. We have faced into this reality, sought to draw a line under the past and begun to rebuild, and already we are beginning to see early encouraging signs from what we’ve done so far.

“The market is still challenging and we are not expecting any let up in the months ahead. When you add to this the fundamental changes we are making to our business and our offer, it is likely to lead to an increased level of volatility in short-term performance. Our clear priority – and the one that will deliver sustainable value for our shareholders – is to improve consistently for customers. The changes we have made and will continue to make put us in a stronger position to do this.”