How the Queen gives UK business an edge 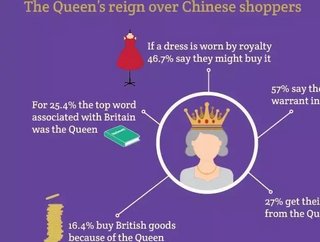 As Queen Elizabeth II becomes Britain’s longest reigning monarch on today, research from Qing Wang, of Warwick Business School, has found out how important she is for promoting the country’s products and business.

Professor Wang said: “The Queen and the royal family are the most significant symbols of British heritage and tradition. They inject a sense of continuity and national identity in the globalised and ever-changing world we live in today.

“The Queen and all the history that comes with her, gives British luxury brands an edge and distinctive advantage.”

The global luxury market - which includes drinks, fashion, cosmetics, fragrances, watches, jewellery, luggage, and handbags - was estimated to be worth €230 billion in 2014, with the Chinese consumer showing the biggest and fastest growing appetite for luxury goods.

British luxury brands like Gieves & Hawkes, Daimler, the Ritz Hotel and Burberry are revered around the world and especially by the Chinese.

Professor Wang’s survey of Chinese consumers asked them what they associated with the ‘Britishness’ they liked so much, and top of the list was the Queen and the royal family.

“Luxury goods are defined as those satisfying hedonic rather than functional needs and our research has found this is an area that Britain enjoys a distinct advantage in,” said Professor Wang.

“The Queen is a significant reason for this, as a very important factor that makes Britain stand out is that it incorporates tradition and innovation seamlessly.

“Put differently, Britain’s advantage lies in the so-called soft power, which is defined as the ability to get what you want through attraction rather than through coercion, and the UK’s royal heritage is a key part of that.

“The extent of its impact is hard to measure and even harder to replicate. As China promotes its own soft power, it has increasingly turned to Britain for inspiration.”

Indeed, Professor Wang believes British products and services that re-affirm their link to the Queen’s and the country’s royalty has helped insulate them from a slump in the luxury market in the last three years.

Professor Wang said: “The continued profit and sale decline of luxury brands are a strong indication that luxury brands are losing their lustre due to over exposure in the global marketplace and outsourcing of production to other countries.

“There is a trickle-down effect of shoppers looking to emulate the luxury lifestyle, but the conspicuous consumption of middle-class consumers is threatening the very essence of luxury being exclusive.

“But the link to the most important British heritage – royalty - reaffirms to consumers the brand’s authenticity and reminds the public of the golden bygone age. Unique and customised product offerings combined with exquisite craftsmanship and the royal association continue to drive sales in emerging markets.”

And Professor Wang says the much sought after Royal Warrant – a mark of recognition to those who supply goods or services to the household of the Queen – gives British products added value as an indicator of quality.

“For British heritage brands, the Royal Warrant is a stamp of approval,” said Professor Wang. “In luxury brand marketing, heritage is a critical resource and is perceived as a key attribute of brand authenticity and brand aura – the miasma of meaning surrounding a brand – plus it is a fundamental resource for retro-marketing and nostalgic branding.

“In addition, our research on the consumer’s authenticity evaluation of luxury brands shows that luxury brands are characterised by a founding myth, history, craftsmanship and a link to the leisured class, something that the Queen certainly helps British products embody.”

·  57 per cent of Chinese shoppers said the royal warrant is important or very important in increasing desirability of British products.

·  The first word most Chinese shoppers associate with Britain is the Queen, with 25.4 per cent saying her first: next was Burberry, Gentleman, Cambridge, Manchester United, David Beckham, Princess Diana, Big Ben, Royalty, London.

·  27 per cent of Chinese shoppers said they get their inspiration for fashion and home style from the Queen and the royal family.

·  16.4 per cent say the reason they buy British goods is because the Queen and royal family wear or use them.

·  If a dress is worn by royalty 46.7 per cent of Chinese said it increases the chances of them buying it.