[Video] Dubai Rebuilt with Nothing but Food 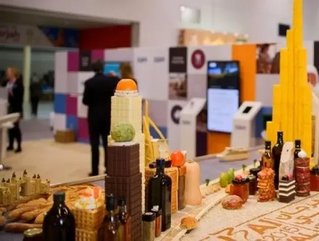 Dubai has been rebuilt by food in a new piece of artwork unveiled by its Department of Tourism and Commerce Marketing in London.

More than 90 corn on the cobs and baby sweetcorn were used to build the model of the emirate’s skyline, which includes food doubles of the Burj Khalifa, Jumeirah Emirates Towers and Burj Al Arab.

It was made by UK food artist Paul Baker. He said: “We had to incorporate as many landmark buildings and geological features as possible, all made from food that wouldn’t deteriorate.

“We needed to find produce and food stuffs that not only wouldn't wilt, smell or decompose but could actually look like buildings. After all, fresh produce is not normally square or rectangular in form. The challenge was to design and construct interesting and recognisable buildings from organic-looking shapes.”

The model will be transported to Dubai in time for the Dubai Food Festival 2015, set for February.

Watch the video below to see how it was made.