200mn saplings planted by Greening Ethiopia Initiative in one day 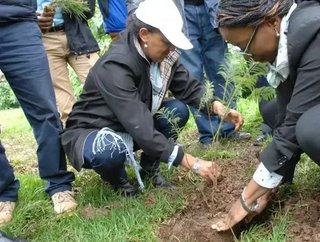 The nationwide reforestation program, which started on Monday morning, had the goal of breaking the world record by planting 200mn sapling trees on a single day. Staff and representatives from the UN family, African Union, Diplomatic Corps and Ethiopians gathered at the Gullele Botanical Gardens and a park in Central Addis Ababa to plant the trees as well as planting additional trees at the Economic Commission for Africa compound.

Established in 1958 as one of the UN’s five regional commissions, Economic Commission for Africa (ECA) aims to promote economic and social development of its current 54 state members, foster intra-regional integration and promote international cooperation.

ECA’s Executive Secretary, Vera Songwe highly praised the planting efforts of those involved and urges more countries to do so. “By greening the country, Ethiopia is leading the Continent in achieving SDG 15 to combat climate change, protect biodiversity and strengthen natural resources management. It is also doing so to increase overall productivity of both land oceans.”

Back in May the program was officially launched by Ethiopia’s Prime Minister Abiy Ahmed and its overall aim is to recover the trees and forests lost over the years. According to the ministry of agriculture there will be continued monitoring and targets “to identify which seedlings have grown and been nourished by those who planted them; and where and which ones have died.”

Most of the seedlings being planted are said to be indigenous tree species, with the long-term target being 4 billion trees nationwide, according to the ministry.