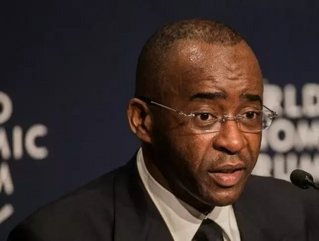 Strive Masiyiwa is famed for being the CEO of telecom company Econet Wireless, however the business mogul also has business interests that span from New Zealand, across the African continent, and even to America’s East and West Coasts. Alongside his immense fortune, Strive has accrued an almost unrivalled set of honours, from business awards to chairs on politically influential boards. In the past he has faced great debt and even the indignation of Robert Mugabe’s government, but through sheer determination he has prevailed.

Many people will be aware that Strive’s approach to business is strongly rooted in Christian teachings – especially for his “zero tolerance of corruption” message. However, few people outside of the African continent know that his mobile telephony company, Econet Wireless, enables its users to subscribe to a daily scripture SMS message.

2) The Best of British
Although he was born in Zimbabwe, Masiyiwa was sent to boarding school in Edinburgh and then went on to successfully complete an undergraduate degree in Electrical Engineering at the University of Wales.

In 1990, in recognition to his hard-fought advances in the telecoms industry, Strive was recognised as Zimbabwe’s Businessman of the Year, when he was 29 years old.

4) Taking on the Mugabe Government
In a bid to improve mobile telephony in his home country, he battled with Zimbabwe’s state monopoly in court and, after many years of legal wrangling, won the freedom to set up his now very successful mobile company Econet Wireless under license.

In the early 1990’s, the Masiyiwa family were subjected to a house search by Zimbabwe’s Central Intelligence Organisation (CIO) and police – the excuse: they were looking for weapons.

Alongside providing numerous scholarships at various universities around the world, Strive, along with his wife Tsitsi, pay for orphan’s high school fees through their charity Capernaum Trust.  The charity operates in Zimbabwe, South Africa, Burundi, and Lesotho, reaching roughly 40,000 orphans.

7) Unofficially Exiled?
It is widely rumoured that Masiyiwa has not returned to his native Zimbabwe, where his telecoms company continues to be successful, for well over a decade. It has been suggested that due to his financial ties to the Daily News, a paper shut down by the administration in 2003. He has always maintained that his move to South Africa in 2000 is simply because the country provides a better platform for global expansion.