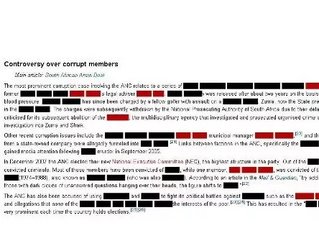 South Africa’s ruling party the ANC reacted to the ‘censorship’ of its Wikipedia page, claiming it is “outright vandalism”.

The changes to the page were made after Jacob Zuma’s party passed the highly controversial Protection of State Information Bill through parliament on Tuesday which if made into law will allow the government to prosecute members of the media who publish anything deemed as “classified information”, even reports on malpractice or corruption in the government.

South African media and civil rights groups were outraged by the outcome of 229 of 400 members passing the bill, dubbing it ‘Black Tuesday’.

A passage on alleged corruption within the party on its page on the online encyclopedia Wikipedia had been partly blacked out, although the page has now been restored.

Party spokesperson Keith Khoza said: "It's conduct that it not consistent with a civilised society. How does that assist any cause or anybody to tamper with information?"

Khoza added that the party wanted the page to be restored and the information to be shown even if it represented the ANC in a negative light. Any user is able to edit or add information on Wikipedia – although it is unknown who exactly made the changes.

Several politicians have strongly opposed the bill, with Cape Town Mayor Patricia de Lille claiming that the proposed law would “take (the country) back even further than apartheid”.