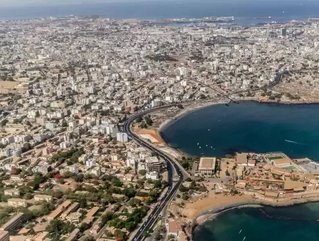 The capital city of Senegal, Dakar is emerging as one of Africa’s most vital business and tourism hubs.

In recent years, business has been booming in Senegal. With a population of around 15.3mn people it is of no surprise that the West African country represents a key economic hub.

At the heart of Senegal is the capital city of Dakar. With around 2.5mn residents living there, accounting for close to a quarter of its entire population, it is the largest city in Senegal.

According to the World Bank, Dakar also accounts for over half (55%) of Senegal’s entire GDP and in 2014 the Government of Senegal adopted the ‘Plan for an Emerging Senegal’.

The vision? To create ‘an emerging Senegal in 2035 with social solidarity and the role of law’. This translates to a structural transformation of the economy through the consolidation of current engines of growth and the development of new sectors to create wealth, jobs, and social inclusion, with a strong capacity to export and attract investment.

Dakar is well and truly at the heart of this transformation.

By land, sea and air

As a testament to the key role that Dakar will play in ‘an emerging Senegal’, one of the largest airports in Africa officially opened its doors in late 2017, The $575mn Blaise Diagne International Airport (AIBD) in Diass, which is around 40km away from Dakar, will open the doorway to more than three million passengers per year in its first year of operation.

This capacity will rise to 10mn as it reaches peak operating performance and has been identified as the “centrepiece” to the Plan for an Emerging Senegal.

Envisioned to be a primary hub of the West Africa region, AIBD will also be the “preferred stopover point for air traffic in Africa, Europe and the Americas”.

The airport is a continuation of a number of major construction and infrastructure projects designed to attract new business and investment into Dakar and wider Senegal.

In 2013, following a 13-year build, a 32km toll road was officially opened to pave the way for more than vehicles to travel to Dakar each day.

In January 2017, the President of Senegal officially launched the first phase of the Regional Express Train. At 55km in length, the rail link will connect Dakar’s city centre to the AIBD in just under 45 minutes. With 14 sub stations along the line, the Regional Express Train is projected to carry around 115,000 passengers to and from Dakar per day following its completion in late 2019.

Given its location on the Cap-Vert peninsula on the Atlantic coast, Dakar has a huge import and export industry.

Key to this import/export industry is The Port Autonome de Dakar (PAD). Described as the “gateway to Senegal’s external trade, the reference logistics platform for the economic development platform” of the country, PAD is set to become the port of excellence on the West African Coast by 2023.

Much like the AIBD, PAD has been identified as the true cross-roads for a number of maritime routes between Europe, North America, Latin America and Africa.

As a testament to the significance of the import/export trade of Dakar, Dubai-based DP World (operator of PAD since 2007) is investing $1.3bn to develop a logistics and economic zone.

Port du Futur, which will be located adjacent to AIBD, will enter into construction in late 2018 and will have an annual capacity of 1mn twenty-foot equivalent units (TEUs).

A city of culture and hospitality

Dakar is not only the capital city of Senegal but also the cultural capital. Back in 1840, Senegal became a French possession and Dakar became known as “the Paris of Africa” due to its vibrant culture.

Fast forward to 2018 and as Dakar continues to exude culture, still retaining a strong of French influence (the official language of Dakar is French).  Culture is crucial to Dakar and wider Senegal and it was recognised as a key contributor to the UNESCO Sustainable Development Goals for 2030.

Just off the shore of Dakar is the Île de Gorée, a UNESCO World Heritage Site. A former site of slave trade and now home to the House of Slaves museum, it brings thousands of visitors each year and is a major tourist attraction for Dakar.

Another hugely significant monument to Senegal’s past is the African Renaissance Monument. Built in 2010, the 49m tall statue (the tallest statue in Africa) stands atop a 100m hill looking over the city.

The statue was built to mark 50 years of African independence from France and continues to attract tourists from all over the world.

Aside from imports and exports, it is clear that tourism is a key contributor to Dakar’s GDP and with Africa’s hotel and tourism industry experiencing incredible growth in recent years, this has attracted some of the biggest hospitality companies from around the world.

This four-star hotel is located in central Dakar on the Corniche seafront, opposite Gorée Island. With 241 rooms and 11 meeting rooms, the hotel is the perfect mixture of business and pleasure.

Located 62 kilometers away from Blaise Diagne International Airport, and 17 kilometers from Dakar city centre, Yaas Hotel Dakar Almadies is the perfect hotel for both business and leisure travellers.