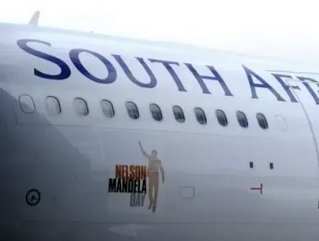 South African Airways (SAA) has revealed its first aircraft to be branded with the Nelson Mandela Day logo ahead of the anti-apartheid icon's 93rd birthday on July 18.

The United Nations has recognised the former SA President’s birthday as Mandela Day, an event to encourage people to volunteer in their communities.

The airline is branding 58 of its fleet with the logo of Mandela’s symbolic pose raising his fist accompanied by the words "18 July Nelson Mandela Day" in grey and orange.

Inside the aircraft, the 280 seats will feature the emblem on the head rests.

SAA Chair Cheryl Carolous said the logo will help "to take the message across the entire globe to contribute to the legacy of our father", Mandela.

"By this initiative, this means SAA will expose its passengers about the Mandela Day message and hopefully they will spread the message to their families and friends," said Nelson Mandela Foundation chief Achmat Dangor.

As part of the celebrations, SAA will also fly 93 selected children from disadvantaged backgrounds all over the country to the foundation’s offices in on Mandela’s birthday. There they will receive gifts including books and school uniforms.

Mandela Day has been established to recognise the former leader’s struggle for justice, and the public have been asked to give 67 minutes of their time for volunteer work – a minute to represent each year Mandela devoted to the anti-apartheid fight.