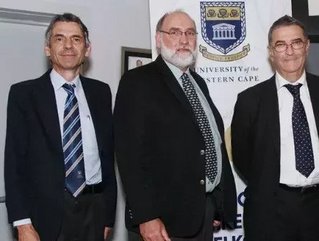 The biggest problems facing South Africa and the world today can be understood, addressed and solved through science, believes the 2012 Nobel Laureate for Physics, Professor Serge Haroche from the Collège de France and Ecole Normale Supérieure, Paris.

Visiting the University of the Western Cape (UWC) to attend the 2013 Science Faculty Research Open Day, Professor Haroche said science was instrumental in finding answers to the biggest issues of our times – from global warming and climate change to health and socio-economic problems.

He said South Africa was no different from many other countries in the world – both developed and developing – in terms of the issues it faced and said science could not only provide solutions but also provide much-needed context for understanding them.

“The world needs new technology, but it can’t simply ask for new devices. New technology is born from blue sky research and time and trust is needed for this,” said Professor Haroche. He added that the global market valued speed and short-term returns and these conditions were at odds with the way scientists had to work if they were to produce groundbreaking research.

Research Open Day organiser and nuclear astrophysicist Professor Nico Orce said the event was a huge success and added that the significance of bringing a Nobel Laureate in physics to UWC for the first time could not be underestimated – especially  at a time when UWC is leading the field in physics research in South Africa.

The university is involved in several exciting scientific projects, studying nature from the smallest to the largest scales, from sub-atomic particles to galaxies. Most notably, UWC is driving the first African-led experiment in low-energy nuclear physics at CERN, the European Organisation for Nuclear Research, one of the world’s largest and most respected centres for scientific research. This experiment would take place in 2015 and preliminary work is already being done in anticipation.

He noted that the value of the Open Day was not only in the sharing of scientific knowledge in academic presentations and exhibits, but also in the exposure to great minds such as Professor Serge Haroche. “It is a wonderful opportunity to motivate and inspire students, showing them that a Nobel Prize winner is also just an ordinary person like them.”

At UWC, he gave two lectures to students and staff members as well as the general public, and also spoke to schoolchildren from various schools in the Western Cape in a hugely popular lecture during which he also answered some of the learners’ questions.

In his lectures, “Power & Strangeness of the Quantum World” he made reference to his own award-winning research and explained how quantum theory opened up the microscopic world of particles, atoms and photons, giving scientists the keys to most modern technologies – like computers, CD and DVD laser technology, and even the Internet, most of which were unknown 60 years ago, but without which we could not imagine our world today.

“Without basic research, novel technologies could not be invented,” emphasised Professor Haroche. After the lecture, he said that it was more important than ever to educate people about science and the role that science had in the world. “The public often does not understand how science works and there is a lot of distrust and fear.”

Professor Haroche said people were sometimes suspicious of science, believing that scientists were plotting against them, for instance, as in the case of climate change and global warming. “Science is a tool for asking questions and giving context to finding solutions. But science doesn’t decide anything. It is up to society to decide how to use the solution.”

Professor Haroche also had advice for young scientists starting out. “Don’t be intimidated by all the knowledge that is out there. You don’t have to know everything; you just need to know one thing before the others. You have to have a passion for what you do, and not follow what is fashionable.”

One student who particularly enjoyed the Open Day was nuclear physics PhD student Siyabonga Majola. He said attending the research day and interacting with other academics had shown him that the work he was doing was relevant and that he could really make a difference in the world. He said Professor Haroche’s lectures were a highlight. “It gives you hope. Rubbing shoulders with someone like that is every student’s dream because it shows you what is possible.”