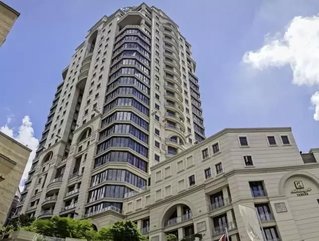 We went through Answers Africa’s list “See Africa’s 15 Most Expensive Buildings” and compiled a list of the 10 most expensive commercial buildings in Africa, by construction cost.

Located in Sandton, South Africa, One Merchant Place took an astonishing $40mn to build, according to Answers Africa. It is part of a building complex made up of four office buildings, and is alternatively known as RMB Towers. With construction beginning in 1996, One Merchant Place was opened in 2000. At 84m high, it consists of 20 floors and takes up a floorspace of 28,000 sqm, making it the building with the most floorspace in its complex and is owned by Rand Merchant Bank Properties.

Designed by two architecture firms, Murphy/Jahn, Inc. Architects and Stauch Vorster Architects, 88 on Field racked up $40mn in construction costs. Located in Durban, South Africa, 88 is owned by Anglo-American Properties and Services and serves as a block of offices. The building consists of 26 floors, making it an impressive 113.7m high while taking up a total land area of 24,500 sq.m. Begun in 1983 and finished in 1985, it was originally known as the Southern Life Building.

Located in South Sinai, Egypt, Hilton Taba Resorts and Nelson Village was originally developed and built by the Israelis for $41mn. It opened in 1982 under the name Ramada Hotel and was signed over to Egypt free of charge in 1989 as a part of a peace treaty agreement between the two countries. With 14 floors, 12 above ground and two below, it stands at around 41m and overlooks three neighbouring countries: Jordan, Israel, and Saudi Arabia. Built on the shore of the red sea, one of its biggest draws is its private beach.

Seventh on our list is Maison des Députés, a hotel located in Yamoussoukro, Ivory Coast. Despite only being a seven-storey building, which classes it as a low-rise building, it built up $50mn in construction costs and took two years to build, with construction beginning in 2004; its doors opening to the public in 2006. Surrounded by swimming pools and lush gardens, its pale pink pyramid exterior is a major attraction to tourists and locals alike.

Hilton Durban is a five-star hotel based in Durban, South Africa. Designed by FGG Architects Incorporated White Arkitekter AB, it took $61mn to build. Standing at 76m, it consists of 21 floors, 19 above ground and two below, and took over two years to build. It stands next to the International Convention Centre and put together, these building sites take up four city blocks that share underground parking. Hilton Durban’s structure is built upon thick foundation, with support up to 40m deep beneath the tower portion of the hotel.

Located in Sandton, South Africa, Michaelangelo Towers is a hotel that managed to rake up $64mn in construction costs. Sandton stands as “the richest square mile” in Johannesburg, South Africa and was designed by architects Bental Abrasion & Partners. Standing at 140m, it consists of 34 floors above ground and two below with 242 suites and rooms. AFK Insider states that Michelangelo Towers connects to the Sandton Convention Centre, which is convenient for hotel guests that need to work in the centre and is also the home site of one of the most expensive penthouses in Sandton, valued at $3mn.

Designed by Augutus Richardson, the West Hills Mall stands in Accra, Ghana, taking up 23 acres of land. Co-owned by Delico Property Developments, and Social Security and National Insurance Trust, it cost $93mn to build. The West Hills Mall, constructed by South African contractors, consists of 67 local shops and 65 chain outlets. Opened in 2014, it is the most expensive shopping mall in West Africa, currently taking up 27,700 sqm in floor space. However, a proposed second phase will bump the floor space up by 7,000 sqm.

Portside Tower, a series of office spaces to let, took $138mn to build. Located in Cape Town, South Africa it is the tallest building in Cape Town, standing at 139m high, only around 9m below the city’s maximum permitted height for buildings. The tower is co-owned by Old Mutual Investment Group Property Investments, which rent it out as office spaces. Designed by architects Louis Karol Architects and DHK Architects, construction began in 2011 and was finalised in 2014. Not only does it stand at 32 floors and have a capacity for 3,000, but it is also the first large building in South Africa to almost exclusively use LED lighting.

Corinthia Hotel Tripoli was inaugurated in 2003 by the then Prime Minister Shukri Ghanem. Located in Tripoli, Libya. The hotel cost $152mn to build and is owned by Ghanem. It was originally known as the Corinthia Bab Africa Hotel and was designed by architecture firm Xuereb Martin & Associates. The Corinthia is a five-star hotel run by Maltese Corinthia Hotel International and is considered the most expensive luxury hotel in Africa, consisting of 28 floors racking up a height of 100.48m.

Topping our list as the most expensive commercial building in Africa is the Africa Union Conference Centre and Office Complex, located in Addis Ababa, Ethiopia. The complex cost $200mn in costs, which was funded by the Chinese government as an attempt to promote international relations between China and Ethiopia. It is the second most expensive building in Africa behind the recently-built Bibliotheca Alexandria in Egypt. Owned by and the headquarters of African Union, its tallest tower stands at 99.9m tall, making it 20 floors in total making it the tallest building in the city. Africa-Facts ranked it the number one most beautiful building in Africa.