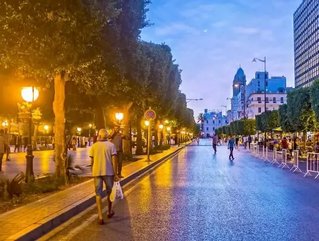 An historical crossroads and dynamic example of the new Arab world, Tunis is many different things all at once. The city’s economy might still be developing, like the country as a whole, but Tunis is a vibrant commercial centre with numerous outlets of opportunity that are open to many.

Tunis’ role as an important crossroads of global travel stretches back thousands of years. Although it was not as well developed or important as Carthage (the remains of which now lie just outside the city limits) at the time, Tunis still played a role in the economic landscape of North Africa while it was a part of the Roman Empire. When it came to many products, the North African cities were more important to the financial strength of the empire at its height than the city of Rome itself.

However, the city truly began to blossom with the establishment of the early Islamic period in the North African region. It grew into an important economic and administrative centre for the area as control of Tunisia was passed between Spain, the Ottoman Empire, and eventually France. Tunis declared its independence in 1956, and its economy has come a long way in a short time in regards to openness and diversity.

A picture of the economy of Tunis

Looking at an overview of the economic facts of Tunisia tells several different stories. After years of GDP growth hovering around the 4-5% range, expansion began to stagnate around 2011, largely hindered by unrest in the country due to the Arab Spring, as well as a pair of terrorist attacks that affected the city’s tourism sector in 2015. However, more recent data shows that economic growth in the country is trending upward once again, even if it has not yet returned to pre-Arab Spring levels.

As for the city itself, Tunis has firmly established its place at the centre of the country’s economy. Approximately one-third of all Tunisian companies are headquartered in Tunis, and it is the only nationally-ranking metropolis in the country. Around one-third of Tunisia’s total GDP is produced in the city of Tunis.

Most analysts would characterise the strength of Tunis’ economy as promising – especially coming off of a recent period of stagnation – but there are some impediments to future expansion that must be acknowledged. Specifically, the unemployment rates for young residents and university graduates in the city remain troublingly high. It is estimated that 35% of young people aged 18-24 living in Tunis are unemployed. High levels of illiteracy among older populations also contribute to the unemployment problem in Tunis, especially for women.

Service businesses loom large over the economic landscape of Tunis and the country as a whole. Tourism is vital to the city’s fiscal health, as its proximity to the Mediterranean Sea has long made it a gateway to Africa for many travellers from the European continent and beyond.

Financial services also play a key role in the economy of Tunis too. The city serves as the home for 65% of all financial companies operating in Tunisia, and government-initiated market reforms in the 21st century have opened the door to a robust financial sector at the centre of the city’s economy.

Planning is currently underway for construction of a new Tunis Financial Harbour, which is expected to have a total value of $3bn and 16,000 new skilled service sector jobs. The project is the brainchild of Bahraini firm Gulf Finance House, and it will serve as the first offshore financial centre in all of North Africa.

A centre of global trade

The service sector is the heart and soul of the Tunis economy, but primary and secondary industries still have a place in the city as well. Several specialised industrial zones have been established in the suburbs surrounding Tunis, and textiles, mechanical goods and chemical products remain important exports for the city.

As for agriculture, the suburbs of Tunis are rich with certain crops, especially grapes for wine production, olives and olive oil, and durum wheat, which is important for the production of dried pasta. Some of these agricultural products have been harvested around Tunis and traded with known world since the days of the Roman Empire. Today, Tunis may be an important regional capital in North Africa, but it maintains a foothold in Europe thanks to its location on the Mediterranean Sea. The European Union is far and away the city’s most important export partner, with exports to France, Italy, and Germany leading all areas.

The Tunisian government has indicated its willingness to open the country to further foreign direct investment (FDI). The country is looking to attract entrants in a diverse variety of sectors, including telecommunication technologies, aerospace, and financial services. In recent years, the government has made economic reforms and more transparent regulations a priority to facilitate FDI.

However, potential foreign partners should note that barriers to entry still remain in Tunis, despite the ample opportunities that exist there. Prominent state-owned businesses are still found throughout the economy, and certain sectors are more or less closed off to foreign entrants.