Is this the future of air travel? 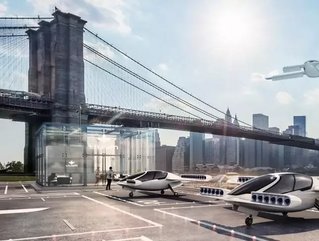 Developers of the Lilium Jet are hoping it could become the aerial equivalent of Uber.

Excitement is building at Munich aviation start-up Lilium that it may be on the cusp of redefining the future of air travel as we know it.

Their mission statement is to “enable a world where everybody can fly anywhere, anytime”, and they may be getting closer to their goal after their Lilium Jet prototype recently completed a series of rigorous flight tests in the skies above Germany.

It’s the first zero-emission electric plane capable of Vertical Take-Off and Landing (VTOL), has an estimated range of up to 300km and a cruising velocity of 300kph, which should make journeys around five times faster than they would be in a car.

The aircraft is powered by 36 electric jet engines mounted to its wings via 12 moveable flaps.  It is unique in combining the benefits of VTOL offered by helicopters and drones, with the speed and range of a jet aircraft.

At take-off, the Lilium Jet’s flaps are pointed downwards to provide vertical lift and then, once airborne, the flaps gradually tilt into a horizontal position, providing forward thrust.

In terms of safety, Lilium’s Flight Envelope Protection System prevents the pilot from doing anything which would take the aircraft beyond safe-flight parameters.

In the recent tests, the two-seater prototype executed a range of complex manoeuvres, and Lilium is now developing a larger, five-seater version of the Jet, designed for on-demand air taxi and ride-sharing services.

Lilium co-founder and CEO Daniel Wiegand is excited by the breakthrough, and said: “Seeing the Lilium Jet take to the sky and performing sophisticated maneuvers with apparent ease is testament to the skill and perseverance of our amazing team.

“We have solved some of the toughest engineering challenges in aviation to get to this point.

“The successful test flight programme shows that our ground-breaking technical design works exactly as we envisioned.

“We can now turn our focus to designing the five-seater production aircraft.”