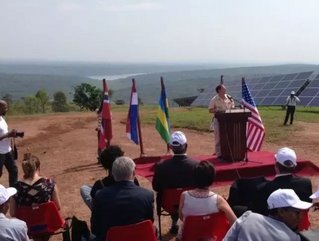 It is an 8.5 Megawatt (MW) solar field at the Agahozo-Shalom Youth Village (ASYV) in the southeast of the country.

The Rwanda field - constructed in the shape of the African continent - brought together an international consortium of financing partners.

Grants were received from the United States Government via OPIC’s ACEF (Africa Clean Energy Finance) grant and from the EEP (Energy and Environment Partnership) Programme, a partnership of the British, Norwegian and Austrian governments. SEDI Labs served as a key project development partner. Norton Rose Fulbright from London served as the international legal counsel.

“Top quality developers like Gigawatt Global are the keys to success for President Obama’s Power Africa Initiative,” said Elizabeth Littlefield, President and CEO of OPIC. “After OPIC provided critical early-stage support through the ACEF program, Gigawatt smoothly and swiftly brought the project online to give Rwanda enough grid-connected power to supply 15,000 homes. Gigawatt Global in Rwanda is a clear demonstration that solar will be a key part of Africa’s energy solution.”

Chaim Motzen, Gigawatt Global Co-Founder and Managing Director, and the main force behind the development of the project stated, “Our project proves the viability of financing and building large-scale solar fields in sub-Saharan Africa, and we hope that this solar field serves as a catalyst for many more sustainable energy projects in the region.

“The speed with which this project was completed is a tribute to the strength of the Rwandan government’s institutions and their laser-focus on increasing Rwanda’s generation capacity as well as to the nimbleness of our team and partners which spanned eight countries.”

The Rwandan project is built on land owned by the Agahozo-Shalom Youth Village, whose mission is to care for Rwanda’s most vulnerable children orphaned before and after the Rwandan genocide.

The village is leasing land to house the solar facility, the fees from which will help pay for a portion of the Village's charitable expenses. Gigawatt Global will also be providing training on solar power to students of the Liquidnet High School on the grounds of the Youth Village.

Yosef Abramowitz, President of Gigawatt Global, believes that “this utility-scale solar field at the Agahozo-Shalom Youth Village is a symbol of hope for sub-Saharan Africa’s tens of millions of orphans and 600 million people without power, ushering in a new era of impact investing that we will hopefully be replicating throughout Africa.”

Gigawatt Global is one of almost 90 private sector partners involved in the U.S. Government’s Power Africa Initiative, which is designed to increase access to electricity throughout all of sub-Saharan Africa.

By providing creative financing, business development support and commercial advocacy through various U.S. Government agencies, Power Africa represents a new model of development which facilitates the work of its partner companies in developing new energy sources, including wind, solar, hydropower, natural gas, and geothermal resources in all of sub-Saharan Africa.

Gigawatt Global’s 8.5 MW solar field in Rwanda is the first utility-scale project to reach financial close and come online under the Africa Clean Energy Finance (ACEF) program, which is now an integral part of the Power Africa Initiative.