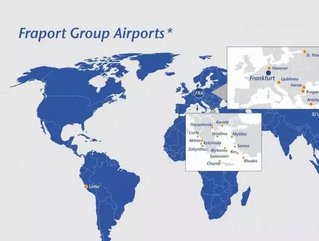 Monthly traffic achieved a new high, exceeding the previous August 2015 record by some 82,000 passengers – with passenger traffic rising for the ninth consecutive month.

During the January-July 2017 period, Frankfurt posted accumulated passenger growth of 4.5%.

Cargo throughput – airfreight and airmail – also continued to increase by 4.2% to 188,009 in the reporting month.

Frankfurt was far from the only Fraport operated airport to see a rise in passenger numbers.

Combined passenger numbers at the Bulgarian coastal airports of Varna and Burgas rose 7.3% year-on-year in the January-July period, reaching 2.63mn.

International passenger traffic in the 14 Greek regional airports managed by a Fraport posted a 14.1% jump in the first seven months of the year compared with the same period of 2016.

According to the data, one million additional passengers arrived at Fraport Greece’s 14 airports in the year-to-date, with the total number reaching 10.6mn passengers versus 9.3mn passengers in the same period last year.

Commercial and non-commercial movements at Mykonos Airport saw a dramatic increase in July on 41.8%.

Fraport Greece has extensive plans for Mykonos Airport in the future, including increasing the total terminal size by 53%, leveraging on the island’s reputation as a popular tourist destination.

Thessaloniki Airport, which is the third-largest in Greece, also recorded good growth in July, with 759,196 passengers – an increase of 16%.

However, the largest growth was seen on the Turkish Riviera. Antalya Airport served some 4.2mn people in July, surging by 64.9%.